Barely three days after identifying over 70 distressed buildings across Lagos, the State Government has pulled down no fewer than four structures discovered to have become weak and could collapse and injure residents if not demolished.

The four buildings of different storeys sited on Herbert Macaulay Street, Ebute Metta axis of the state were pulled down by the government through Lagos State Building Control Agency (LASBCA) officials.

According to LASBCA, the ongoing removal of distressed buildings was in furtherance with the government’s zero-tolerance to building collapse and prevention of loss of lives as well as property across the state.

Speaking after the demolition on Monday, the General Manager of the agency, Gbolahan Oki, said that all the buildings in question were identified as distressed structures by a team of LASBCA Monitoring Officers earlier in the year.

Oki hinted that all efforts to prevail on owners of the affected buildings to ensure due process and best practices in consonance with Lagos State Building Control Regulations proved abortive as they left the buildings unremoved, posing threats to life and property within the community.

He said: “The buildings were built on drainage channels, fence without airspace and have been served all the statutory enforcement notices in consonance with the Lagos State Urban and Regional Planning and Development Law of 2019 as amended.

The General Manager, in a statement signed by the agency’s Asst. Director Public Affairs, Gbadeyan Abdulraheem, stressed that none of the respective Owner/Developer responded before they were eventually removed by the agency, in other to prevent the building from caving on their neighbours.

Oki added: “The decision was taken after a thorough engineering appraisal and monitoring of the building carried out by the Agency in the state with a view to ensuring a better physical planning environment for sustainable development and averting needless loss of lives and properties”. 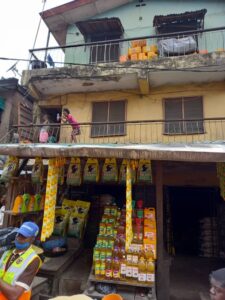 “The demolition is a signal to any would-be recalcitrant developer who circumvents Government rules and regulations as provided by regulatory provision of the law, the Structures shall be removed by the Agency and the cost of removal will be borne by the owner”.

According to the General Manager, people have shown disregard for the state laws on building in the past which the resultant effect is worrisome; so we are appealing to building owners and developers to desist from starting a building project without obtaining building approval.

He insisted that building owner/developer should seek authorisation from Lasbca, hire the services of relevant professionals, speak to safety, and test their building materials before commencement of building construction subject to the type of structures they are putting in place to make the building safe, secure and fit for habitation.