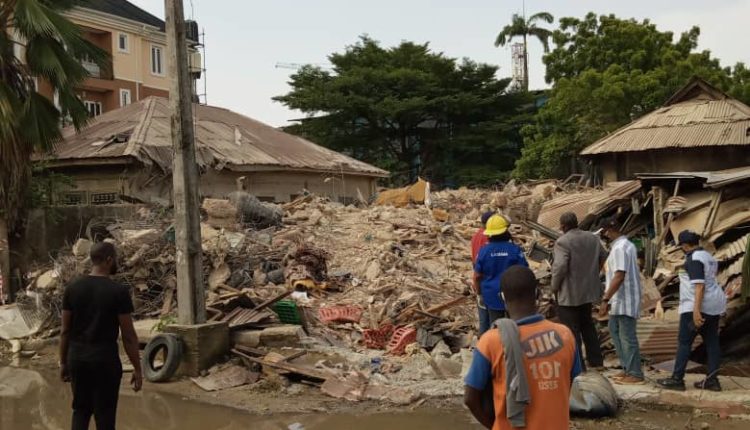 The Lagos State Government has demolished a three-storey building in Ebute Meta, Lagos Mainland area of the state.

It explained that the action was taken after the building situated at no 6 Tonade Street Ebute-Metta, experienced a partial collapse during the early hours of today.

The General Manager, Lagos States Building Control Agency (LASBCA), Engr. Biola Kosegbe, noted that the 3-floor structure had been previously identified, sealed and marked for demolition and all the occupants evacuated by the Agency before the partial collapse on Monday.

Kosegbe, through a statement released to newsmen by the Asst. Director, Public Affairs Unit, Gbadeyan Abdulraheem, on Monday, revealed that the structure had failed the integrity test recommended by the agency in its entirety, adding that the property  was one of those already earmarked for removal by the state government.

“In a swift reaction, the Agency sealed up the property while Lagos State Emergency Management Agency (LASEMA)officials who were already on ground commenced the removal to prevent any loss of lives and properties,” the statement said.

She, however, urged owners of old buildings to ascertain the level of structural stability of their properties to avert collapse as the country approaches raining season.

While reacting, the Director General, LASEMA, Dr. Olufemi Oke-Osanyintolu, said the action was in line with the Governor Babajide Sanwo-Olu’s priority to safety of lives and properties of all Lagosians.

The DG, through a statement by LASEMA, Head, Public Affairs, Nosa Okunbor, noted that the pull down exercise of the building to ground zero, was to ensure it no longer constitutes a threat to occupants, neighbours and passers by in the area.

“Upon arrival at the scene of incident, it was discovered that an old storey building was severely distressed with the reinforcement having corroded resulting in visible cracks on the walls and pillars likely due to a lack of maintenance.

“Fortunately, there is no loss of life nor injury sustained at the scene. All the occupants have been evacuated and the entire building cordoned off to prevent any secondary incident,” the statement read.