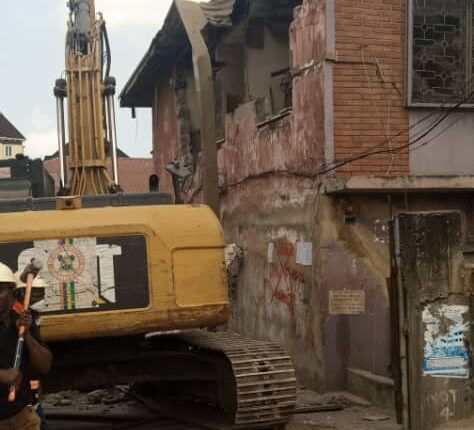 Share
As a measure to reduce cases of building collapse, particularly during the rainy season in Lagos, the State Government through the Building Control Agency (LASBCA) has intensified inspection of buildings to ascertain their stability, removing about 20 that had become distressed and a threat to lives and property within the communities where they were erected.
The completely defective buildings were said to have been pulled down manually and with machines by the LASBCA officials within the past two months, to ensure that no residents of Lagos die and suffer losses as a result of collapsed structures across the metropolis.
As gathered, the buildings were detected and pulled down by the LASBCA officials during their daily enforcement exercise to prevent defective buildings from collapsing on occupants as well as affecting other residents in the state.
Disclosing the statistics during an enforcement exercise in Lagos island axis of the state, the General Manager of the building control agency, Gbolahan Oki, said the agency would not relent to ensure the state continues to record zero collapse building cases.
The building control agency boss, who led members of his enforcement team to the Oba of Lagos, Riliwanu Akiolu’s palace to receive his blessing and intimate him of their plans, hinted that all needed strategies would be adopted to ensure property owners and developers construct habitable buildings.
Oki, meanwhile, decried the alarming rate of defective structures in different parts of Lagos Island, assuring that the agency is working hand in hand with other relevant stakeholders in the built sector to restore sanity to Lagos Island and other parts of the State.
The LASBCA boss disclosed that the team had to issue abatement notices to some non-confirming structures in the areas visited.
He warned inhabitants of physically-distressed structures to desist from always asking for additional weeks and months before they can vacate affected buildings when the structure is already a disaster in waiting.
His words: “Our emphasis has always been that whenever we discover that a particular building is distressed, what is expected of you is to vacate such a building immediately without waiting for any prompting from government officials because a distressed building will not give warning before it collapses”.
Listing locations of some defective structures identified during the enforcement exercise as 25 and 26 Koilo Street, as well as 26 Atiko along Koilo on Lagos Island, the General Manager maintained that the buildings are going to be demolished within the next two weeks because they constitute a danger to the occupiers in their present state.
During the enforcement exercise, some buildings under construction as well as those at various stages of renovation were sealed by the Agency. The affected buildings are located at 45, Enuowa Street, 42, Ricca Street, and Iga Idugaran Street, all on Lagos Island.
Responding, Oba Akiolu pledged his support to the government and pleaded for a more holistic approach to building control activities by nipping substandard construction in the bud from the planning stage of construction works.
He charged LASBCA to increase its staff strength so that the entire nooks and crannies of the State can feel their presence such that non-conforming construction works going on in some parts of the State can be easily and quickly discovered by officers right from inception.