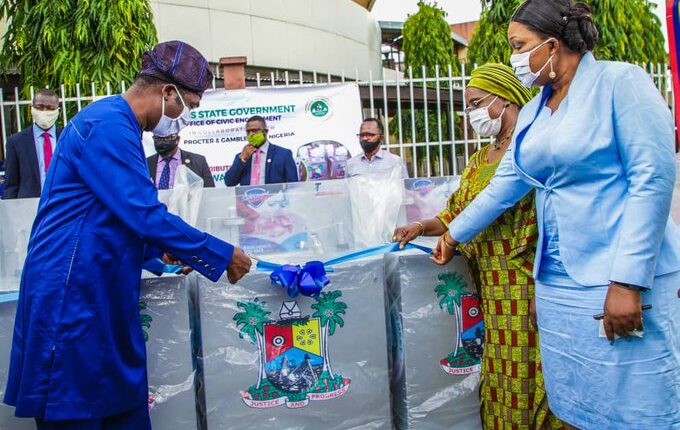 Share
As a strategy to flatten Coronavirus in Lagos and sustain it, the State Government and  Procter and Gamble, one of the leading FMCG (fast-moving consumer goods) manufacturers, have created 100 public handwashing stations for the state.
The 100 public handwashing stations to be set up in Local Governments and Local Council Developments Areas (LCDAs) have been deployed to the councils to inculcate the importance of hygiene in Lagosians and contribution towards gaining control over COVID-19.
According to the state government, each of the council in Lagos is expected to have at least two public handwashing stations to curtail the spread of coronavirus within the state.
At the flag-off of the stations on Wednesday in Lagos, Deputy Governor, Dr. Obafemi Hamzat, and Special Adviser to the Governor on Civic Engagement, Aderemi Adebowale, demonstrated how Lagosians can make good use of the facility to prevent them from contracting the virus.
After the demonstration, Hamzat disclosed that there were plans to deploy the stations to public schools when the Federal Government consider reopening of schools for the continuation of the academic session.
The deputy governor, while commending the initiative, described the involvement of P&G in the fight against the pandemic as an act that should be emulated by individuals and corporate organisations.
Earlier, Aderemi stated that the stations were of three variants and that they were designed to foster the culture of good hygiene practices among residents of Lagos as a way of reducing the COVID-19 spread.
The special adviser stated that P&G was actively involved in production of the stations which were considered as another strategy that can contribute to the Babajide Sanwo-Olu administration’s drive to delist Lagos from COVID-19 ravaged state.
“Type A has a mounted water tank and meant to service areas where there is no reticulated water source, while type B will be installed where there is a reticulated water source that can be connected directly at public places such as markets, bus stations, hospitals, and many other identifiable public places so that members of the public can have access to water and dispensable soap to wash their hands.
“It is heartwarming to note that members of the Organized Private Sector did not leave the burden of curtailing the spread of the COVID-19 to Government alone, many of them have undertaken or provided one facility or the other to assist the State Government in this regard.
“I am pleased to inform you that Procter and Gamble (P&G) actively collaborated with the State Government in the production of the 100 units of Hand Washing Stations amongst other support extended to the State Government, by the company, as part of the fight against COVID-19 in the State”, she added.

Aside from these, the special adviser hinted that the stations for the school were designed specifically to serve pupils and students considering their vulnerability to contracting the virus in the state.
“In view of the fact that schools would be partially opened anytime soon, being a proactive government, the Office of Civic Engagement has designed and produced a prototype Hand Washing System for primary schools in the state. It will serve both senior and junior primary school pupils. As the need for further protection cannot be overemphasized”.