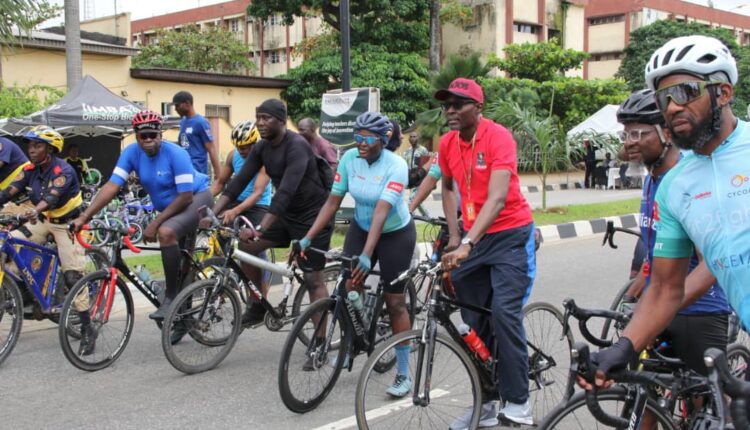 As part of measures to reduce carbon emissions across Lagos, the State Government has disclosed plans to annually set aside September 22nd to educate residents on the need to reduce their dependency on vehicles and embrace cycling and other Non-Motorized Transport (NMT) systems.

The government added that the day would be used for extensive advocacy to make people understand the benefits awaiting them when they make good use of any of the NMT modes in the state.

The State Governor, Babajide Sanwo-Olu, announced the plans on Sunday during the state’s maiden edition of “Car Free Day”, held in Alausa, Ikeja, which was also attended by the Permanent Secretary, Ministry of Transportation, Gbolahan Toriola.

Sanwo-Olu stressed that the government aimed to take the heat off the planet by encouraging people to be less dependent on automobiles which contributed to the huge carbon emission across the state.

According to him, although cars are convenient and offer a number of benefits, they also contribute a dangerous amount of pollution.

“Every September 22nd, car-free day is celebrated globally. We will publicize it and encourage the people to join us and it would become part of our policy in Lagos”.

He explained that the Car Free Day was an avenue for a city like Lagos to appraise the state of its road network and create an innovative way of making non-motorized transportation equitable, effective, and sustainable in the State.

Sanwo-Olu assured Lagosians that the celebration of the Car Free Day in the State will create a paradigm shift in the culture needed for the transformation of the city of Lagos. 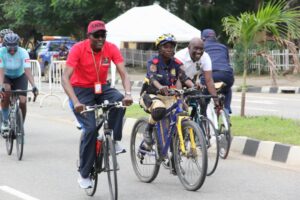 The governor, who was represented by the State Commissioner for Transportation, Dr. Frederic Oladeinde, disclosed that simultaneously with the advocacy, the government would be introducing new infrastructures to ensure a seamless implementation of the plan.

Sanwo-Olu, revealed that in the construction of some of the terminals, bicycle parking has been included to encourage the citizenry to embrace NMT.

“This administration is making tremendous efforts to make transportation in the state more effective, efficient, and sustainable through its several infrastructural,  policy, and institutional reforms to curb the looming dangers of climate change.

Speaking to the press at the event, the Transport Commissioner, Dr. Frederic Oladeinde reassured us that the infrastructure to support Non-Motorised Transport will be put in place to ensure seamless movement for the commuting public.

He stressed that the decision was important as transportation is the biggest culprit of carbon emissions affecting the environment negatively.

Oladeinde also re-affirmed that bicycles lanes will be created for cyclists on the road to encourage the use of bicycles which will benefit the public by ensuring pollution-free environments, road safety, and improved health for every individual regardless of their age

The Transport Commissioner further stated that the Ministry of Transportation is working with physical planning to pilot the Non-Motorised Transport Policy and sustain it.

The Managing Director, Lagos State Metropolitan Area Transport Authority (LAMATA), Abimbola Akinajo, who was represented by Osa Konyeha, disclosed that plans were underway to implement a cycling pilot project that would traverse Eti-Osa and Ikoyi-Obalende councils.

Akinajo stated that the Design Review Sub-Committee had conducted site visits and prepared a preliminary design, which will be discussed extensively with all key Stakeholders at the next quarterly meeting.

The Managing Director also affirmed that LAMATA is committed to implementing a network of walking and cycling routes to implement a transport system that improves the lifestyle of the people and improves the economic competitiveness of Lagos.

Also speaking, Yinka Jones, who represented the Lagos Urban Development Initiative (LUDI) maintained that the level of pollution in Lagos is increasing due to motorized activities. He encouraged all the role players to play their part in reducing pollution in the State by embracing Non- Motorised Transportation.

Temitope George, representing Cycology, one of the NGOs that collaborated with the State Government to organize the event added that the essence of “Car Free Day” is to awaken the consciousness of residents to the fact that there are other alternative modes of transportation which is the Non-Motorised means of commuting revealing that her NGO had earlier spear-headed the “share the road” campaign in collaboration with LAMATA.

She explained that the “Share the road” campaign is aimed at sensitizing the motorised road users that the road furniture is for everyone while calling on the State government to continue its inclusive infrastructure that will ensure cyclists, bikers, skaters and other Non-Motorised road users co-habit safely.

The representative of the African Cycling Federation (ACF), Dennis Kange, raised concerns about the rate of air pollution and road crashes in the State calls for concern.

He re- emphasized the need to create more awareness about the social and environmental benefits of Non-Motorized Transport modes.