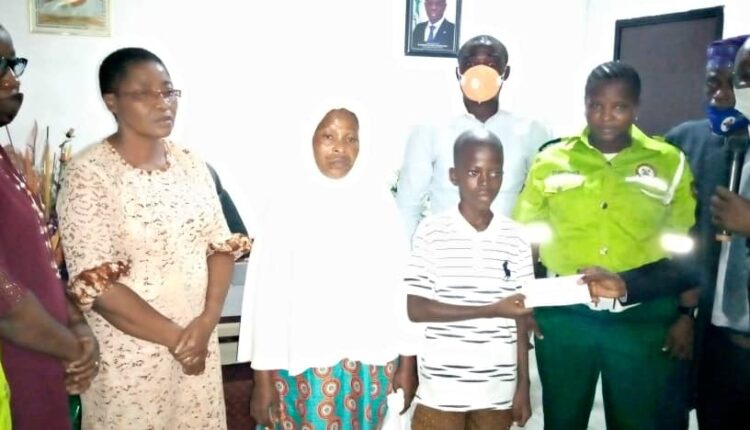 As part of its resolve to compensate civil servants who died on active duty, the Lagos State Government has paid N5,000,000 to the family of late Kick Against Indiscipline (KAI) officer, Moshod Ayeni, who died in active service.

It explained that the government’s commitment towards supporting staff of her agencies that fall victim of injustice while on active service to the state necessitated the gesture.

It would be recalled that the late Ayeni died after suffering an attack by illegal and defiant hawkers in the State during an enforcement operation on Tuesday, May 23rd, 2017.

The Permanent Secretary, Office of Chief of Staff, Olawale Musa, said the gesture remains a testament to the premium placed on lives of civil servants by the Governor Babajide Sanwo-Olu-led administration.

While speaking at the presentation which was held at the Command Centre, Bolade, Oshodi, Musa, who was represented by the Director, Special Service, Akinrinmade Morakinyo, said that the government will stop at nothing in its commitment to provide adequate welfare packages for its workforce.

“It is sad that Ayeni lost his life in active service to the state. The administration of Mr Babajide Sanwo-Olu will continue to show his support for the family left behind by officers who lose their lives while on duty.

“Lagos State is charging all the law enforcement officers in all the state-owned agencies not to feel deterred by what has happened but be resolute in doing their best to the service of the state,” he said.

He admonished the beneficiaries to effectively and judiciously utilize the money in a way that will gladden the heart of the late Ayeni by catering for the family he left behind.

In her own remarks, the KAI Marshal, CP Akinpelu Gbemisola (retd) expressed gratitude to Governor Babajide Sanwo-Olu for consistently compensating beneficiaries of civil servants that passed away in active service in the State.

She explained that the incident that led to the death of Ayeni and the supportive gesture of the State government has further encouraged other officers of the Agency to rid the State of hawkers, street trading and other environmental nuisances which have constituted a menace to the security and well-being of motorists and road users in Lagos.

She affirmed that violent individuals will not be spared and be brought to book as the Agency exercise her mandate to rid the State of street trading, adding that this kind gesture is a morale booster from the Governor and it will go a long way to alleviate the suffering as well as support the deceased’s families.