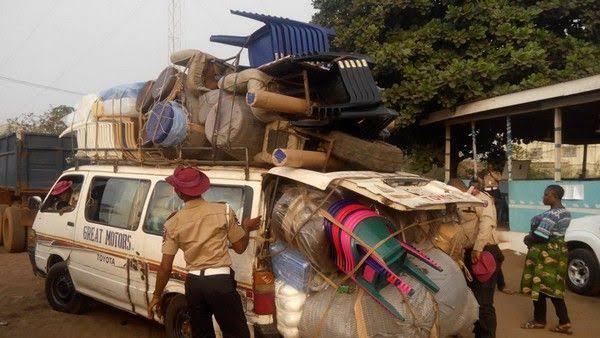 The Lagos State Government has disclosed that plans are underway to criminalize motorists loading vehicles beyond their capacities to ensure safer roads in the state.

It explained that the state may harmonize some of its traffic law rules alongside that of the Federal Government law which criminalizes anyone carrying excess load beyond road capacity in order to ensure the long-lasting of the roads.

The Special Adviser to Gov. Babajide Sanwo-Olu on Works and Infrastructure, Aramide Adeyoye, said the purported measures was to ensure a safer road enforce all laws pertaining to the roadworthiness of vehicles plying roads across the state.

Adeyoye, who disclosed this during the 2020 ministerial press briefing to commemorate the first anniversary of the Sanwo-Olu administration, maintained that once the law is harmonized, roads in the state will last longer.

“It becomes like an offense when you do excess loading on those road pavements, you pay a charge or penalty. I am sure by the time we do that, these roads will last longer,’’ she said.

She also revealed that the government was also reviewing its Public-Private Partnership (PPP) laws to encourage private sector participation to address the huge road infrastructure deficit in the state which government alone could not handle.

“We will definitely encourage PPP participation but we also need to amend our PPP laws so that it becomes attractive to investors.

“And also, our arbitration laws must be made to be investors friendly. So we are looking at those laws so that we can get the best from investors.

“That is why we have called in investors for the 4th Mainland Bridge, we are looking for investors to see who has money and to see that they deliver value for the money,” she said.

According to her,  measures are also being put in place to begin strict enforcement of laws that would put a stop to the damaging of public infrastructure, especially roads by residents in the state.

Adeyoye, while lamenting excess loading, indiscriminate road cutting, and burning, as well as theft of manholes covers, appealed to residents to support the protection of government assets.

The Special Adviser noted that the office of the Civic Engagement would soon embark on a massive enlightenment campaign to change the attitude of residents towards public assets in the state.

“We are trying to promulgate laws and enforce existing laws to make people liable for vandalizing public assets.

“For open manholes covers, I keep saying this, anything we do not take ownership of is like no man’s property.

“When I see people burn tires on the road, manhole covers removed by scavengers, I say we should not be so destructive because this is your money, our money, tax payer’s money.

“Mechanics stay on the road and want to repair cars there, one thing we say in the Ministry of Works is, ‘stop vandalization of those properties take ownership of them.’

She urged residents to assist the government to safeguard the public facilities by educating themselves on the dangers their actions posed to others.