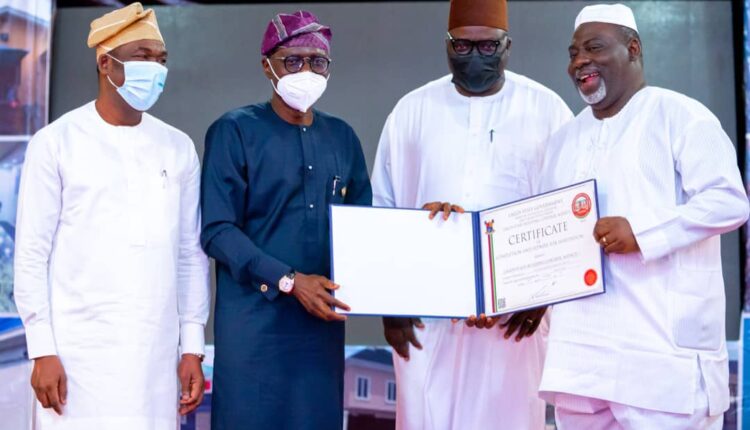 The Lagos State Government has said that in next two years 100,000 property owners, existing and new, must have obtained it’s newly introduced Certificate of Completion and Fitness for Habitation, which was designed by the state government to solve issues of property collapsing without signs of distress.

It said that the certificate is compulsory for property owners within the state and that the measure was basically to forestall unforeseen circumstances and cases of building collapse that were often recorded in the state.

The state government indicated that the actions to enforce legitimate right on property owners was necessary as a means to protect lives and property within the state after several incidents of building collapse which had led to the loss of lives and property.

It noted that many developers and property owners may see no reasons for obtaining the certification but through continued sensitization on the benefits of the policy, many would subject their property to test from the Lagos State Building Control Agency (LASBCA), as part of the effort to get their property certified.

The government disclosed that during sensitization, residents particularly Lagosians seeking to rent houses would be educated on the need they should request for the certification before paying any developer or property owners in the state.

Speaking on the new certification for property across the state, the State Governor, Babajide Sanwo-Olu, stated that the certification of property for habitation was not peculiar to Lagos alone, saying different countries of the world have relevant laws and regulations guiding haphazard developments.

Sanwo-Olu said: “The launch of the Certificate of Completion and Fitness for Habitation is one of the moves to further strengthen our resolve to control building collapse incidents. This is a game-changer in building control strategies as it portrays us a government that thinks ahead and that is concerned about the safety of lives and properties of the citizens.”

“Considering the lofty intentions behind this idea, and the need to further guarantee the safety of all residents of this great State, the State government will not hesitate to start treating some house owners, contractors and other relevant stakeholders as individuals responsible for building collapse in the State if they fail to apply and obtain Certificate of Completion and Fitness for Habitation on their buildings”, he added.

Addressing stakeholders in the built sector during the launch of the certificate at an event held in Ikeja on Wednesday, LASBCA General Manager, Arc. Gbolahan Oki, stated that the agency’s core mandate was to correct anomalies in the construction of habitable structures, stressing that the agency would always act in the interest of the public to prevent loss of human lives and valuable properties.

“Without a doubt, the relaunch of the Certificate of Fitness for Habitation stands to benefit both the State and the citizenry. Obtaining the certificate entails that every stage of building construction will be closely monitored by the LASBCA officials. This process is aimed at ensuring that all buildings in the state are deemed safe and habitable for occupants,.

“Our projection is that in the next 2 years, we would have been able to onboard at least 100,000 property owners under the new scheme to obtain the rebranded Certificate”, he added.

Oki hinted that, as part of the measure to achieve the projection, LASBCA has simplified the approval process through the use of technology, whilst blocking all loopholes that could compromise the process for Lagosians.

“The rebranded certificate, which is backed up with a security code, cannot be compromised. The value addition of the Certificate is also not limited to obtaining a clearance because it could also serve as collateral for obtaining a bank facility. Furthermore, the confidence of would-be tenants, property buyers, and Banks/Insurance companies would be highly boosted when their property of interest boasts of the Certificate.

“Generally, Stakeholders are encouraged to confirm that properties of interest are duly certified before payment of rents, the conclusion of property transactions, or approving loan transactions respectively, in order to ascertain the level of structural stability and safety of the building.

“Therefore, in a bid to minimize the recurring incidence of building collapse, we are putting in place strategies that would endure and serve as a pedestal for improved service delivery to our teeming clients in Lagos State. This was the thinking that birthed the need to rebrand the Certificate of Completion & Fitness for Habitation, amongst other revolutionary initiatives.

The LASBCA boss, meanwhile, appealed that the state government set up a specialized unit of Police and Paramilitary Officers that would operate directly with the agency to enforce construction laws within the state.

According to him, we believe Sir that this will strengthen our enforcement drive and stem issues of harassment and incessant attacks on LASBCA officials. It will also go a long way in compelling compliance for a better physical planning environment.

Tinubu, Sanwo-Olu, others describe Ndubuisi Kanu as a visionary leader

Sand, gravel trucks in trouble over indiscriminate parking across Lagos