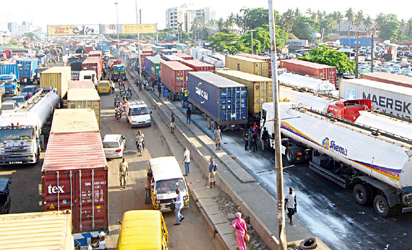 The Lagos State Government has disclosed that plans are being concluded to limit trailer and truck drivers’ operations to 9 hours daily and restrict the operators in the sector from plying some routes across the state.

He explained that the need to stem the upsurge of road crashes attributed to operations of heavy-duty vehicles in the metropolis necessitated the trailer and truck drivers’ operations’ restrictions.

The state’s Commissioner for Transportation, Dr. Frederic Oladeinde, said that the Governor Babajide Sanwo-Olu-led administration has mapped out dedicated routes to be plied between 9:00 pm and 6:00 am daily across the state.

Speaking yesterday at the stakeholders’ meeting with representatives of the Truck Driver Unions held at the Secretariat, Alausa, Ikeja, the commissioner elaborated that the move was to lighten the burden on the Apapa axis which had been rendered less profitable for investors due to the gridlock and activities of truck drivers in the area.

He urged the stakeholders to cooperate with the government in restoring sanity to the area, enjoining them to put aside sentiments and think of other motoring public.

According to him, the policy is not meant to cause rancor but geared towards opening up the state for greater economic realities, and attitudinal change on the part of truck drivers is required to make progress.

The commissioner further implored the stakeholders to see issues raised as work in progress while noting that discussions with the unions are ongoing until the grey areas are cleared.

The Special Adviser to the Governor on Transportation, Oluwatoyin Fayinka, declared that non-compliance from truck drivers would be met with the full weight of the law and appropriate sanctions exerted on offenders, advising that they must utilise the grace period to get their acts together and conform with the directives.

While requesting the Nigerian Ports Authority to furnish the Ministry with information on the call-up schedule on daily basis, Fayinka maintained that the information would also help control the influx of vehicles into Lagos, especially Apapa ports, and prevent the parking of tankers and trucks along road corridors with its attendant damage on the road infrastructure which contributes to traffic gridlock.

Fayinka further enjoined the operators to secure parks outside Apapa to curb the gridlock and work, hand in hand, with the State Vehicle Inspection Services (VIS) and the Federal Road Safety Corps (FRSC) by ensuring their vehicles are Road Worthy with the warning that rickety vehicles would be impounded.

Responding on behalf of the union representatives, Remi Ogunbgemi, while commending the government for calling the meeting, appealed for support to the truckers with necessary infrastructure as well as a review of the directive, especially with respect to restriction of movement to night time.

He added the unions are also taking necessary steps to digitize their operations, such as using an electronic call-up system for trucks due at ports to reduce the number of trailers parked along the roads.