Three Chinese, one other die during bus explosion in…

PDP cautions banks, others against transacting with Zamfara… 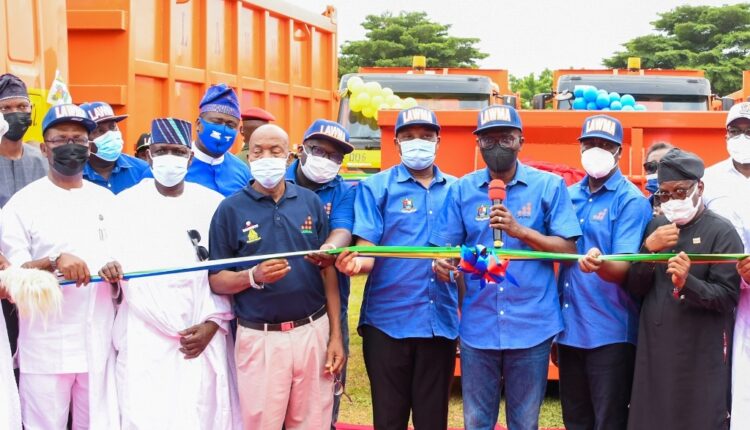 Share
In a bid to ensure proper waste collection and management across Lagos, the State Government has invested over N3 billion in the rehabilitation of dumpsites and the construction of three new transfer loading stations.
Also, the State Government has concluded plans to deploy 102 new locally assembled trucks through the Lagos State Waste Management Authority (LAWMA) and 100 newly procured double dino bins, to prevent indiscriminate waste disposal across the state.
Announcing investments made to address waste collection in Lagos, the State Governor, Babajide Sanwo-Olu, said that the unprecedented intervention was put forward to address the logistical and operational shortfall currently been experienced in collections of waste across the state.
Sanwo-Olu, who disclosed the funds invested after receiving the newly procured trucks and others on Wednesday, added that the investment was made to reduce turn-around time in waste evacuation within the metropolis, thereby achieving a cleaner and healthier environment.

While recalling the state of waste collection on the assumption of office, the governor stressed that the administration was determined to rewrite the narrative of waste management in Lagos State, for the better.

“This determination has seen us already invest more than N2 billion towards the rehabilitation of dumpsites across our state.  Another N1 billion naira is currently being invested in the construction of three new transfer loading stations to provide the necessary infrastructure to facilitate the effective delivery of solid waste management services”, he added. 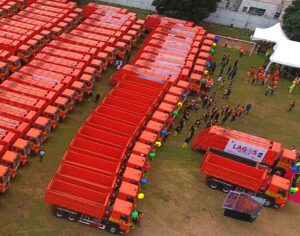 The compactor trucks were assembled by LAWMA technicians in conjunction with Dangote Sinotruk Manufacturing firm and they are designed according to the local requirements to aid the clearing of waste from generating points to transfer-loading stations. Each compactor truck has three years warranty and maintenance package.

Besides, the Governor formally launched a mobile application called “CitiMonitor”, which would enable monitoring and reporting of environmental infractions, including indiscriminate dumping of refuse.

By their design, LAWMA Managing Director, Ibrahim Odumboni, said the new compactors were fabricated to address the problem of liquids dripping from waste trucks – the snag synonymous with second-hand trucks mostly used by PSP operators.

Odumboni added that the new compactor trucks were fitted with sitting compartments for waste collection assistants to prohibit hanging on the trucks as currently been witnessed with the old trucks.

The managing director said that the trucks would be distributed across the four operational districts of the agency, while the double dino waste bins would be stationed at muster points across major markets.

“We will not take this intervention for granted, because we know that these assets have been acquired at great cost amid economic challenges and so many other competing needs. I assure Mr. Governor and Lagosians that these working assets will be properly looked after,” the LAWMA boss said.