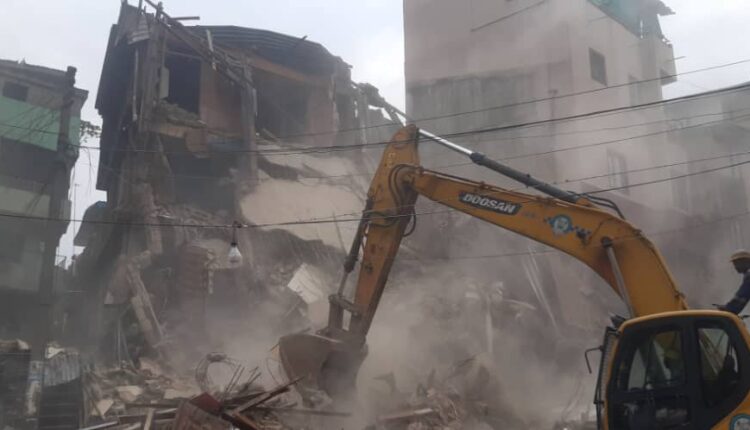 The General Manager, Lagos State Building Control Agency (LASBCA), Arch. Gbolohan Oki, has disclosed that no fewer than 70 buildings certified as distressed have been identified for demolition in line with the Lagos State Government’s commitment to protect the lives of residents and prevent avoidable deaths.

He noted that the identified and marked 70 buildings are noticeably dilapidated and highly distressed buildings within the state which would be removed to further prevent the collapse that could lead to loss of lives and properties.

The LABSCA boss explained that 20 of the structures were discovered in Lagos Island area of the state and added that removal of the identified structures would follow due processes which include conducting a Non-Destructive Test (NDT) on the structures to verify if they were fit for human habitation or needed to have some works done on them.

He added that the decision had been taken following the demolition of a partially collapsed structure at no 19, Church Street, Lagos Island, which claimed the life of a 5-year-old boy, with other occupants sustaining minor injuries during the incident.

Speaking at the site of the building, Oki said that it had become necessary to immediately remove the building seeing that it was highly dilapidated, distressed, and not fit for human habitation.

He emphasized that there are over fifty buildings marked for demolition in Lagos and the motive was to sanitize and rid Lagos of distressed and dilapidated buildings in a bid to stem the era of building collapse in the state.

The LABSCA boss noted that he and other officers from the agency had earlier visited the scene to get an on-the-spot assessment and asked the residents to evacuate and relocate for their own safety.

The general manager further reiterated that the government has zero-tolerance for building collapse and that the agency would continue enforcing all building codes regulations within the state, including the need for all buildings above 2 floors to obtain insurance as contained in the building regulations 2019 (as amended)

He warned building developers, owners to always do the right thing by involving LABSCA in their construction by seeking authorisation to commence construction after obtaining necessary building permits, invite the agency in every stage, and finally obtaining certificates of completion and fit for habitation once the construction was fully completed.

Oki appealed to residents to assist the government in actualizing its objective of creating a safer Lagos by reporting noticed substandard building constructions and dilapidated structures within their locality to the agency for necessary actions.