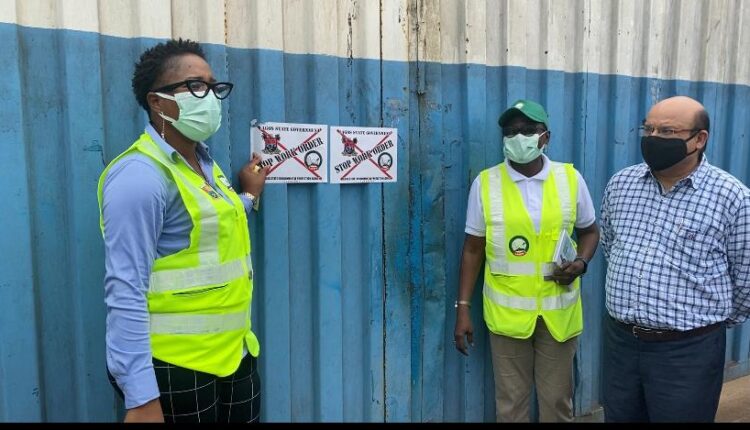 As part of measures to protect Lagosians, the State Environmental Protection Agency (LASEPA) has warned steel and iron manufacturing companies to do away with practices that impact negatively on residents within their communities, saying we will continue to do everything within our power to protect the people from activities that could endanger lives.

LASEPA said that all steel and iron manufacturing companies operating within the state should ensure that their activities were within the state’s permissible environmental standards.

Fasawe, who led the enforcement team to the two companies, described as unsafe the working condition in both companies, noting that the workers were conducting their daily duties within the company at minimal risk control and that they were surrounded by communities whose residents could be further harmed by both firms’ actions.

The General Manager, on Monday, revealed that the visit to the factories was in response to complaints received from residents and environmental monitoring data, as well as the outcome of surveillance conducted by LASEPA three days prior to the official visit.

According to her, the visit further revealed that most of the activities going on around Ikorodu industrial area were not in compliance with Lagos State environmental standards, as well as international best practices vis-à-vis industrial waste management and circularity.

“There are environmentally friendly ways to carry out recycling activities, Lagos State is promoting and encouraging a shift from linear to a circular economy. The government under Governor Babajide Sanwo-Olu encourages recycling but not at the expense of our peoples’ lives and the environment.

“A lot of the machines used here for recycling are archaic, poorly maintained, not fit for purpose under current and future environmental standards. They release large quantities of noxious gases, fumes, and other hazardous substances which are a direct result of prioritizing profit over the planet and people.

” As a government, we will continue to do everything within our power to ensure that the quality of air which our residents breathe and indeed all environmental media (land, soil, flora, fauna) is not negatively impacted by industrial activities.” the LASEPA boss added.

Speaking further, the General Manager revealed that the State Government in partnership with the World Bank (WB), sited in six-pilot Air Quality Monitoring Stations located in Akoka, Jakara-Island Ipaja, Ikeja, Lekki, and Ikorodu, adding, these monitoring stations track all vital air quality indices as well as provide data on the distribution and flow of pollution events from source to receptors.

“Historical and real-time measurements from the pilot Air Quality Monitoring Station in Ikorodu has repeatedly shown high levels of various by-products of iron recycling operations in the air around Ikorodu and as far as downwind as Lagos Island.

“These standardized air quality measurements, backed by the best in meteorological science, have greatly assisted LASEPA to identify pollution by source, type/components, and potential for realistic dispersal/spread to other parts of the State and Country.

According to her, all sealed-up plants must provide an environmental action and clean-up plan, a detailed environmental management policy document, as well as normalize all necessary State government documents and taxes before being considered for reopening. Dr. Fasawe stressed this resolution, with a bias for workers’ safety and due consideration for the environment, adding that the monitoring exercise will continue and would be extended to other parts of the State.

The General Manager, Sunflag Steel Nigeria Ltd, Pankaj Mutreja, and his counterpart from Top Steel Company, Adilya Pathalk, have agreed to comply with all environmental laws of the state and stop all environmentally damaging activities.

The residents commended the Agency’s visit and called for quick intervention and remediation directed towards restoring the natural state of currently affected areas including Odo-nla and Odo-Kekere areas of Ikorodu. Mr. Fred Fola, a resident of the host community to the companies, expressed readiness to work with Government to ramp up reporting in a bid to curb the unfriendly activities of industries within the area.

Taliban celebrates US troops exit from Afghanistan after 20yrs