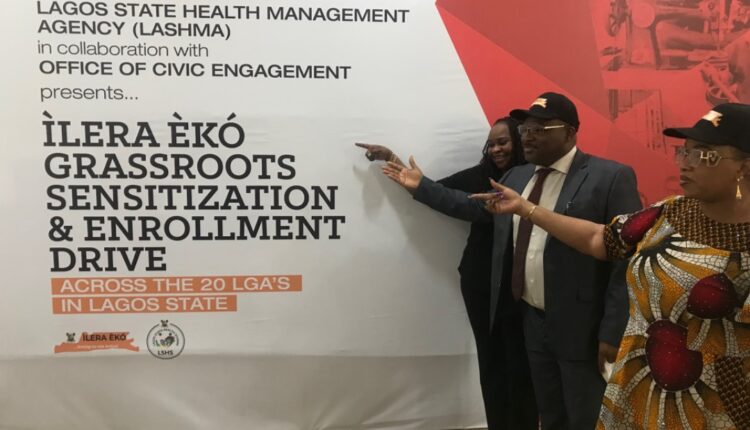 Atleast 86, 458 vulnerable and indigent Lagosians have been enrolled on the Lagos State Government health insurance scheme, to ease their access to better healthcare services across the state.

These residents were brought into the scheme through the government subsidy and private sector sponsorship, a measure to ensure universal health coverage within the state.

The over 86,000 vulnerable and indigents enrolled on the health insurance scheme code-named Ilera Eko by Lagos State Health Management Agency (LASHMA), were among the over 526,846 residents benefitting from the scheme designed made necessary for all residents in Lagos.

The LASHMA General Manager, Dr. Emmanuala Zamba, disclosed these during interaction with newsmen in Ikeja on the Ilera Eko grassroots sensitisation and enrollment drive across the 57 Local Governments and Local Council Development Area (LCDA) in the state.

Zamba hinted that the target, in the next one year, was to enroll at least three million residents into the state health insurance scheme, saying that is why we have made the enrolment process easy for Lagosians through the expansion of our offices.

Aside from that, she noted that the government, unlike other health schemes, has also introduced the Ilera Eko pay small, that is, a policy that allows enrollees to spread their premium for the duration of 12 months.

The LASHMA boss added that to also ease health accessibility for Lagosians, over 222 health facilities had been enlisted to attend to enrollees across Lagos.

Zamba stated that these strategies including the sensitisation and enrollment drive about to be embarked upon, became important because the state government understands importance healthcare to developments.

Earlier, the Special Adviser, Office of Civic Engagement, Aderemi Adebowale, said all around the globe, health remains on the priority list of every government at all levels, and Lagos cannot afford to be an exception.

“This is the reason the administration of Governor Babajide Olusola Sanwo-Olu is focused on ensuring that all the residents of Lagos State, have access to quality, equitable and affordable healthcare regardless of their socio-cultural-economic status, towards the attainment of Universal Health Coverage (UHC) in our state.

“This has necessitated the government to embark on the building and renewal of health facilities all around the State and the continuous initiation and promotion of various intervention programmes that include the Lagos State Health Insurance Schemes also known as ‘ILERA EKO’.”