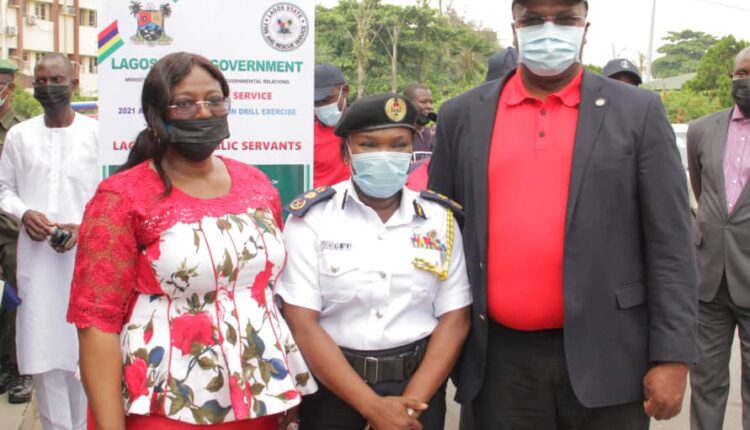 The Lagos State Government has begun to engage and enlighten residents on the importance of installing firefighting equipment and adopting other measures that could prevent revenue and property losses during fire disasters across the state.

It said that the engagement became necessary following the property and huge revenue that often go down the drain whenever major or minor fire disasters occur in any part of the state.

The government noted that the funds often lost during fire disasters across the metropolis have impact on the state’s economy particularly the victims.

According to the government, the revenue and property which the state lost to fire disasters during the present year and previously could be channeled to further improve the state’s economy.

The Director of the State’s fire and Rescue Service, Margret Adeseye, stated these on Wednesday during commencement of the 2021 annual fire evacuation drill exercise which was themed: Sustaining Lagos economy through fire prevention.

While expressing the need for drastic reduction in number of fire disasters and other related cases, Adeseye noted that the number of disasters recorded during the year was less than previous year but there was need for Lagos, been the commercial nerve centre of the country, to record lesser fire incidents.

According to her, we are working daily to bring the number of fire disasters to the barest minimum because a reduction will help the state’s economy to develop geometrically.

She said: “The more we record fire outbreaks, the higher the losses and the more the economy losses funds that can either be channeled by government to provide other social needs across the state or individuals to boost their businesses.

“And that is why we have decided to educate the public servants and residents of Lagos during this window on fire disaster preventions. Our aim is to bring fire disaster to the lowest in Lagos”.

On what details of their sensitization exercise would be, Adeseye explained that Lagosians would during the 20 days be enlightened on what they have to do away with particularly anything that could “cause fire disaster in our homes and offices”.

She added: “We will also be educating them on the importance of installing firefighting equipment in their houses and offices. And to often alert the Lagos State Fire Service whenever they discover any fire issues either major or minor in their communities”.

Earlier, the Permanent Secretary, Ministry of Special Duties and Intergovernmental relations, Dr. Omobolaji Gaji, said that both the government and citizens record losses whenever fire disaster occurs in the state.

Gaji noted that the funds expended on firefighting by the government could often be diverted towards providing other amenities for Lagosians across the state, adding but this funds are spent on responding to emergencies.

He added that this was the reason the government decided to continuously train civil servants and residents on fire preventive measures.

“The importance of this exercise cannot be overemphasized. Like you see in the THEME agenda, what we focus on is public order and safety.

“So the administration of Sanwo-Olu, has empowered the fire service and other agencies responsible for safety to go out and mitigate cases of fire disaster so that lives and property would be protected.

“And doing this, we will be able to reduce the cost that often goes into rebuilding after fire incidents. We believe that through preventive measures, money and lives would be saved”.