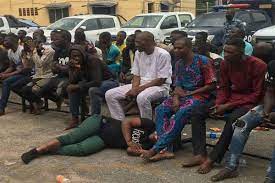 The Lagos State Government has dropped a murder case against a Yoruba Nation agitator, Tajudeen Bakare, popularly called Ogboni Chief, that was previously detained by the Nigerian Police for allegedly been responsible for the murder of a sachet water seller, Jumoke Oyeleke.

Bakare has also been set free by the Nigerian Police and has returned home like 47 others apprehended earlier granted bail by a magistrate court sitting in Yaba axis of Lagos.

He and the over 40 others were apprehended and detained by the law enforcement agency during the Yoruba self-determination protest held on July 3 in Ojota, Lagos, and were earlier charged for contravention of the order against unlawful assembly across the state.

After the arrest, he was accused of been the killer of Jumoke a shop assistant reportedly died after she was hit by a stray bullet during the Yoruba self-determination protest held last month in Ojota axis of the state.

Through a statement signed by the Communications Manager, Ilana Omo Oodua (IOO) Worldwide, Maxwell Adeleye, yesterday, said that Bakare has also been released like the other agitators.

Maxwell added that “The magistrate court could not hear the case and it was referred the High Court. The Court refers Bakare’s case to the Director of Public Prosecutor (DPP) for further advice and because there was no evidence, the case was withdrawn by the state government.