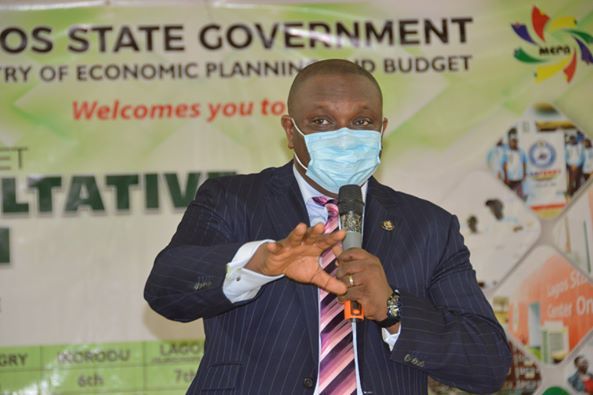 As part of the efforts to complete existing infrastructures, the Lagos State Government has disclosed that the sum of N386.46 billion external and local loans will be secured to fund the ₦521.275 billion deficit in the Y2022 Budget size of ₦1.758 trillion.

A breakdown of the sum to be borrowed by the Babajide Sanwo-Olu-led administration showed that N39.599 billion would be sourced externally while N346.861 billion have been earmarked to be sourced from local financial institutions across the country.

It said that the balance to the deficit would be financed with the N134.815 billion bond raised recently, to ensure that the budget which was christened “Budget of Consolidation”, achieve its desired purpose for Lagosians.

Before now, the Debt Management Office (DMO) had ranked Lagos as the most indebted state among the 36 states, putting the state’s local debt at N532.12 billion.

The Commissioner for Economic Planning, and Budget, Sam Egube, who disclosed this on Friday during a media briefing on the analysis of the Year 2022 Budget, explained that the deficit funding stood at 21 percent of debt service to total revenue of the state under the year.

Egube, while describing the fiscal total expenses for the year as a landmark budget in the history of the state, both in its size and texture, stated that it has been carefully designed to ensure it consolidates and increases gains recorded last year.

He said: “Total Revenue is estimated at ₦1.237 trillion while deficit funding requirement is ₦521.275 billion, which at 21 percent of debt service to total revenue is within the fiscal sustainability benchmarks of 40 percent.

“Our overriding budget objective to achieve a budget of consolidation is: Substantially, complete existing and ongoing infrastructure project infrastructure is essential to statewide economic and social development.

“We have increased our investment in infrastructure by 86 percent over the prior-year budget to N619 billion representing 35 percent of the entire budget size.

“Prioritization of existing, contractor funded (front-loaded) infrastructure projects are: Completion of 8 Stadia across the 5 Ibile divisions of Lagos State, to facilitate youth development, engagement and community sports, construction and rehabilitation of schools across the state to significantly improve access to quality education, construction of the 6-lane reinforced concrete Lekki Epe Expressway from Eleko junction to Epe T-junction.

“This strategic project is aimed at accommodating the increasingly huge and heavy vehicular movement in the Lekki Epe axis especially when the deep seaport and the Dangote refineries et al comes into operation, procurement of 62 fire vehicles to improve fire response service all over Lagos by further decentralization of operating locations all over the state. This will strengthen our emergency response capability.

“Construction of 130 bed New Massey ultra-modern and fit for purpose Pediatric programmed and emergency general hospital. We believe that when this hospital, which will be located at Lagos Island is completed, it will be the largest specialist children hospital in sub- Saharan Africa.

“Construction of the Opebi Link bridge to Maryland that will improve significantly travel time and alternative route options around the axis. All these projects are contractor funded, with structures that provide very beneficial payment terms that give the state upfront value (front-loaded) ahead of payments; thereby increasing the sustainability benefits to the state.”