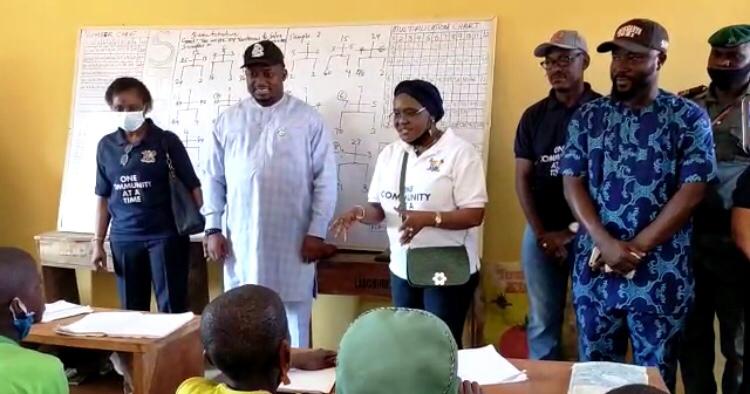 The Lagos State Government and its working partners including contractors have partnered on school rehabilitation and creation of recreational centers across thirteen identified communities through a state government community-based developmental programme tagged ‘One Community At A Time’ (OCAAT) recently launched by the government to look into communities in need of basic amenities.

Specifically, the collaboration between the state government and its working partners was aimed at ensuring both government and private sector, as well as Non-Governmental Organisations (NGOs), continue to contribute towards the development of communities through harmonization of resources.

The partnership, as said, has continue yielding positive results through several ongoing rehabilitation of rehabilitation of schools, new constructions of recreational gacilities, primary health centers and other amenities in the 4 pilot Local Government of Epe, Ikorodu, Alimosho, and Ojo.

The Guild gathered that the contractors also entered an agreement with the state government to either rehabilitate schools or create recreational centers in their host communities being part of their Cooperate Social Responsibility (CSR) to those areas.

The Secretary to the State Government, Folashade Jaji, stated that OCAAT was part of the State Governor, Babajide Sanwo-Olu’s initiative to ensure that Lagosians directly feel impact of his administration and that the community-driven development programme was designed to touch lives directly.

Speaking during a visitation to project sites in Alimosho and Ojo axis on Thursday, Jaji disclosed that thirteen communities would be benefitting from the governor’s initiative before completion of the present administration and that the programme would touch areas including healthcare, education, recreation, sanitation, and also look into other basic needs that needed immediate attention of the state government.

She indicated that School I and School II in Alimosho were currently undergoing rehabilitation being handled by one the state contractors as well as a recreational center in Ojo being sponsored by another working partner.

She explained that the projects through the OCAAT initiative were to bring the impact of the T.H.E.M.E.S agenda on selected communities whom she described as margins of society and that members of the communities would have the opportunity to enjoy dividends of good governance.

According to her, OCAAT is a community-driven development initiative, designed to provide impactful intervention in poor communities by combining the efforts of the state and local governments with CSRs of organised private sector, and the activities of donor partners.

“The OCAAT initiative is an integrated, inter-sectoral and community-based programme that will achieve sustainable improvements in the life of people across Lagos State. The key targets of this initiative are underserved communities with little or no access to fundamental basic amenities such as sanitation, basic healthcare and education.

“The programme will bring about cohesion and integrated approach to the development of communities in the state by bringing together key ministries, departments, agencies, community leaders, civil society, private sector, multilateral and bilateral agencies.

“A total of 13 communities were visited over a period of four weeks and 5 communities were initially selected for the first phase. The communities include Gbaji-Yeke (Badagry West LGA), Ijedodo (Ojo LGA), Egan (Alimosho LGA), and Okegun-Odofin (Ibeju-Lekki LGA) and in order to ensure full transparency, the preferred method of partnership is for partners to executed their selected projects with oversight by the OCAAT team. Also, financing for the program will come through a pooling of resources from the government, private sector, development institutions, NGOs, the community, and well-meaning high net worth individuals (HNIs)

“Today, I led the OCAAT team to inspect some of our ongoing projects in Egan (Renovation of Community Primary School 1 and 2 sponsored by LARALEK) in Alimosho and Ijeododo (Construction of a New Recreation Park and Garden) in Ojo. The two communities are part of the 4 Exco-approved communities for our interventions in line with our commitment to bring the initiative to fruition.