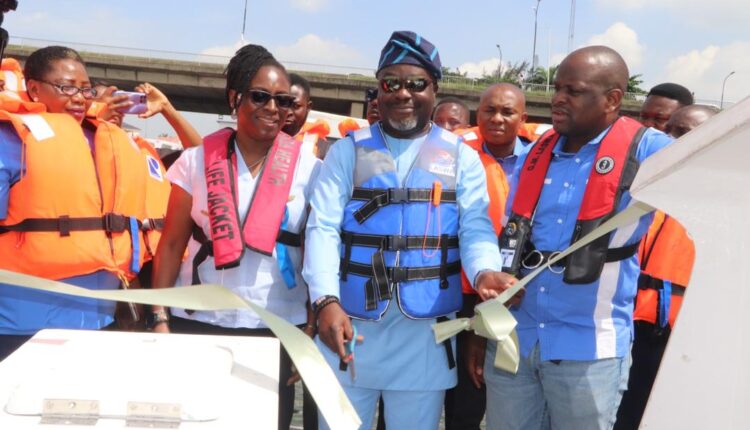 In a bid to improve medical care across riverrine communities, the Lagos State Government has launched a ‘Floating Clinic Boat, to provide health care services on inland waterways and bring it closer to residents in the state.

The clinic boat which is compartmentalized into four sections including; the Wheel house (for captain and crew), observation room (for patients), Doctor’s office and Nurses station and reception has marine safety equipment including life jackets, fire bucket, life buoy, life rat fire extinguisher and navigational lights, as well as navigational equipment like garmin ecomap, compass, VHF radio accessories and siren.

Speaking at the unveiling and inspection of the boat clinic, the Permanent Secretary, Lagos State Ministry of Health, Dr. Olusegun Ogboye explained that the idea behind the Floating Clinic was to help provide first aid, medical emergency care and basic healthcare services at accident scenes on the inland waterways and riverine communities in Lagos State.

He said: “The Floating Clinic is mainly to deal with emergencies on the waterways and provide outreach services to riverine communities. This is part of the initiative by the Ministry of Health to ensure that we extend our medical and ambulance service to the waterways, remote riverine communities and areas that can only be accessed by water. This is also an example of partnership between different agencies of government; the boat actually belongs to LASWA but will be operated by the Ministry of Health”

Ogboye disclosed that the Floating Clinic will be deployed for the ongoing integrated measles and COVID vaccination campaign in riverine communities and water ways across Lagos State adding that it is part of a plan initiated by the present administration of Governor Babajide Sanwo-Olu to ensure that emergency services in Lagos are ramped up to the point where response time are reduced. 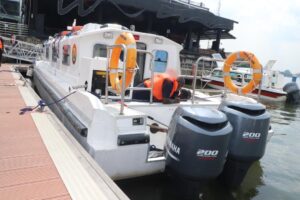 In his words: “This is a strong partnership between LASWA and the Ministry of Health. LASWA has provided the boat, the crew and gas to run the boat, and the Ministry of Health will provide the human resources and medical consumables for health care provision. It is part of a plan that has is initiated by Mr. Governor to ensure that emergency services in Lagos are ramped up and we can respond very quickly to emergencies.

“This is the beginning of the initiative. There is definitely an intention to expand, scale up and integrate our ambulance services; our ambulance boats, mobile intensive care units and transport ambulances. It is something that we have planned that is certainly why we are starting with one boat and we are going to expand. It is a sustainable idea, we already run ambulance services, we are only expanding to include the waterways and we have the human resources to run it”.

The Permanent Secretary noted that there will be a minimum of two medical personnel on board the Floating Clinic at any one time who will run shifts adding that citizens in riverine communities can have access to the Floating clinic by dialing the Lagos State Emergency numbers.

Speaking in the same vein, the General Manager, LASWA, Mr. Damilola Emmanuel noted that the initiative will further add to the integrated emergency and rescue system being put in place by LASWA to ensure safety of commuters and wellbeing of citizens of riverine communities.

“As you know, for us at LASWA, we have been gradually building emergency and rescue efforts and gradually seeing how the safety on the water ways keeps improving year after year. This is just another initiative to further add to the integrated emergency and rescue system because what we are going to do is to have our own core emergency and response boat in our jetties along with the soon to be launched control room.

“If you noticed, I used the word integrated because apart from the floating clinic which will be attending to emergencies, we are going to have the core emergency team which will be made up of divers, boat captain and medics on the core rescue boat which LASWA will provide”, he said.

Earlier, the Senior Special Assistant to the Governor on Health, Dr. Oreoluwa Finnih stated that one of the core tasks of the Floating Clinic boat is medical outreach services to riverine communities to provide primary health care services including immunization, disease prevention and health promotion services to citizens.

“Most people have the impression that Lagos is a completely urban city, but for us we realize that Lagos has a lot of communities along the waterways which are not necessarily connected to the city. Mr. Governor recognizing this, directed that medical services be taken to these areas as part of the mandate to achieve universal health coverage. When this initiative was brought to his attention, this was one of the factors that led to the quick acquisition of the boat to bridge the identified gap in health access”, she explained