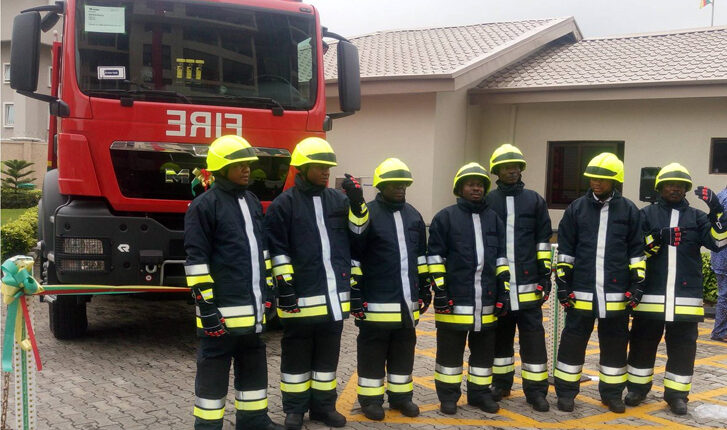 The Lagos State Government has increased the manpower of its officials in the fire and rescue agency with the deployment of 100 newly recruited firefighters to various stations to reduce response time to emergencies across the state.

These were disclosed this at the passing out parade of the newly trained 100 firemen (squad 21) and the decoration of Margaret Abimbola Adeseye as the Director, Lagos State Fire and Rescue Service, held at Ikeja Fire Station.

Speaking at the ceremony, Commissioner for Special Duties and Intergovernmental Relations, Tayo Bamgbose-Martins, said that the occasion was a testimony to the determination and dedication of the Governor Babajide Sanwo-Olu’s administration to provide employment opportunities for youths and also guarantee the safety of lives and property.

According to him, with the employment of 100 new firemen, the Governor has attempted not only to solve the issues of unemployment in the state, but also uplifted fire operations in the State Fire and Rescue Service.

Bamgbose-Martins, who said that the newly employed officers have been given requisite training, enjoined the firefighters to be dedicated and commit themselves to the administration;s agenda in order to guarantee safety of lives and property.

He urged Lagosians to embrace all safety protocols that are meant to reduce needless incidents of fire outbreaks in the state, noting that it is a collective responsibility to ensure a better, safer and secured Lagos.

The commissioner said: “The current administration has invested hugely in the agency.  From the construction of a fuel dump that will serve the chains of firefighting equipment, creation of additional departments and units, enhanced welfare package and improved training system.

“The administration has also helped to reposition the Fire and Rescue Service with provision of beds and beddings, ongoing renovation of all existing fire stations, reconstruction of the headquarters, expansion of the Fire Service operation, construction of additional fire stations, the extension of rescue service to the 20 Local Government Areas of Lagos State, provision of additional Fire Engines, Light Tools and Equipment, and procurement of fire trucks, in order to improve our service delivery across the State, among others.”

Bamgbose-Martins noted that the Sanwo-Olu administration’s  commitment to the Fire and Rescue Service has helped to improve emergency response time; reduce victims/ casualties/fatalities by about 59%; reduce fire and related emergency incidents by 25.24% and false calls by 77.06%. From July 2019 till date, our Fire Fighters have attended to over 2,700 distress call.

Earlier, Director, Fire and Rescue Service, Margaret Adeseye, said that the training for the newly recruited staff would bring about improvement in the response pace of firemen to emergency occurrences in the state.

While adding that the exercise would translate to a drastic reduction in losses on the part of the citizenry and shore up the state’s Gross Domestic Product (GDP), she assured that the new staff would continue to uphold a proud service delivery to save humanity.

“Fire Stations in the state are currently undergoing varying degrees of renovation by the government and this is aimed at enhancing their capacity to perform optimally.  The resultant effect of this professional training for the firefighters  will expose them to accurate representations of  Fire behaviour and best ways to tackle fires under emergency conditions.

“The Sanwo-Olu administration has established additional 3 new Fire Stations at Epe ll, Ajegunle-Apapa and Ebute Elefun, Lagos. With this, the total number of fire stations in the state has increased to 19 and as part of the effort to sustain the current momentum in fire response, immediate approval has also been given for the construction of another Four fire stations at Ijegun -Egba, Oworonshoki, Ijede and Mainland”.

She thanked the Governor for paying special attention to the State’s Fire and Rescue Service through improved welfare system as well as the provision of sophisticated Fire fighting kits and equipment.

She urged the new officers to uphold the tenets and ethics of the Fire and Rescue Service profession by dedicating themselves to the prevention of fire outbreaks as well as protection of property and lives of the good people of Lagos, noting that they have been equipped with the necessary knowledge, moral and practical skills, which will enable them compete favourably with professional colleagues in any state of the federation.