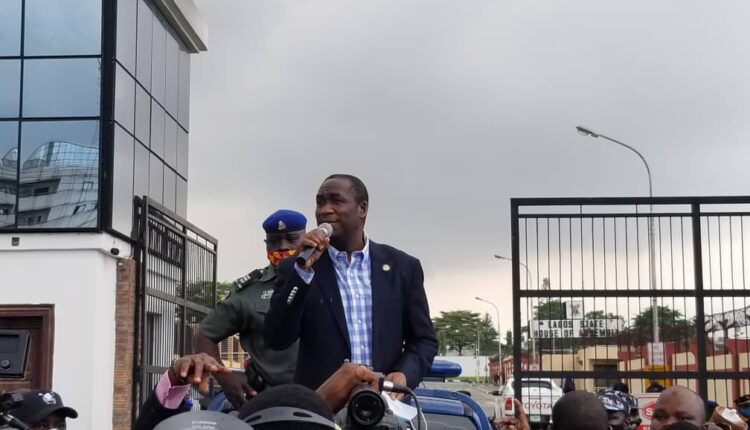 The Lagos State Deputy Governor, Obafemi Hamzat, has disclosed that urgent actions, particularly reforms across the police architectures would reposition the Nigeria Police Force for effective service delivery that would earn Nigerians’ confidence and applaud.

If thoroughly pursued, he said, the reforms would address issues of officers excesses and end alleged police brutality as being pushed for by youths, who he said, are at receiving end of police misconduct and overzealousness that had led to deaths of several young Nigerians.

Hamzat said that the upsurge in harassment of Nigerians that prompted youths in their hundreds to take to streets in protesting excesses of Special Anti-Robbery Squad (SARS) of the Nigeria Police Force, if not promptly arrested through reforms, could lead to civil unrest.

Addressing youths who were protesting alleged brutality, extortions, and extra-judicial killings of innocent Nigerians by SARS officials on Friday in Alausa, the Deputy Governor said that outright disbandment of SARS may not get the job done as being advocated by Nigerians, adding that initiatives through acceptable standard reforms would end officers excesses.

According him, the state government in collaboration with relevant stakeholders would join forces with the Federal Government and police hierarchy in ensuring that interest of Nigerians were protected and that youths can move around without fear of police harassment and intimidation.

Others, he said, would include working together to ensure arrests, maiming and killing of Nigerians, particularly youths by officers who are to guarantee citizens maximum safety becomes history and that any police found wanting would be investigated and prosecuted in line with extant laws.

“Police must find those spoiling their names and prosecute them. There are those of them who are harassing our youths, it must stop. The only way it will stop is for them to prosecute the bad eggs among them.

“Before you remove a fence, you must understand why the fence was put there. You must go on a tour. If there are issues, you repair it,” Hamzat said.

The Guild had earlier reported that youths in their hundreds had stormed the streets of Lagos to protest excesses of SARS over brutality, extortions, and extra-judicial killings of innocent Nigerians allegedly by the officers.

The protest which entered it third day today, the youths claimed, was to register their grievances and cement social media outrage that had been trailing excesses of the SARS personnel which had claimed lives and properties of Nigerians.

The protesters who had earlier kept vigil on Thursday night, gathered at the entrance of Lagos State House of Assembly and were demanding outright disbandment of SARS before the address by Hamzat. The Deputy Governor’s call for reforms rather than disbandment was greeted with thunderous ‘No’ by the protesters led by musicians and social media celebrities.