After observing that residents of Lagos were not ready to comply with directives on social gatherings, parties, and clubs, the State Government has adjusted the procedures to further prevent residents from holding any gathering in the state.

The adjustment, which reduced the number of persons that could be allowed to gather for a social event at any location from 50 to 20, came after a mall and one plaza was sealed by the social gathering enforcement team in Lekki axis of the state, for contravening the government directive banning large social gatherings, parties, and clubs in the state.

It was further learned that the increase in confirmed cases further spurred the Babajide Sanwo-Olu led-administration to introduce the new measure to prevent spread of the disease in Lagos.

Adjustment in the social gathering procedures was contained in a banner posted on one of the state’s official social media handles, stressing that any gathering that is above 20 people would not be allowed anymore.

The banner was released by the ministry of information and strategy on Saturday, titled: Social Distancing: Practise social distance of atleast 1 meter. 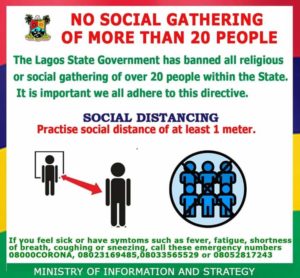 The banner reads: “The Lagos State Government has banned all religious or social gathering of over 20 people within the state. It is important we all adhere to this directive”.

Before this, it would be recalled that the state government had banned all congregational religious activities, a pronouncement that had forced several religious outfits to adopt online worship services.