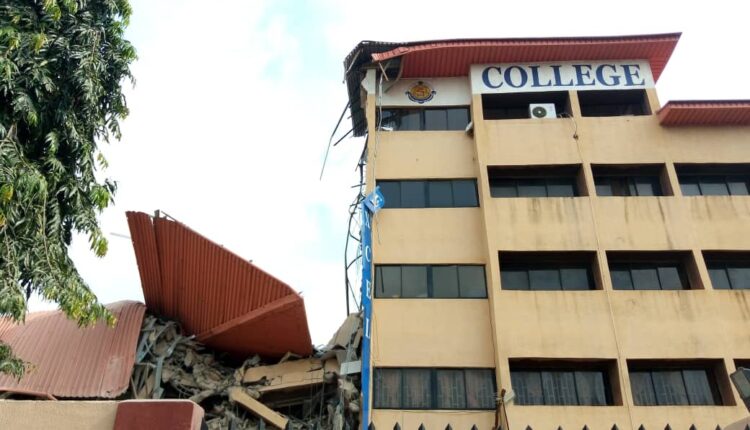 The Lagos State Governor, Babajide Sanwo-Olu, has approved the complete demolition of entire buildings on premises of Excel College in Ejigbo, Oshodi-Isolo Local Government, that partially collapsed in the state.

Sanwo-Olu was said to have approved the demolition after reports of Structural Integrity Test (SIT) conducted by Lagos State Material Testing Laboratory on the structure left within the premises showed that the building was unsafe for human habitation.

The governor, who gave the directives during a briefing on Saturday while briefing pressmen at the State House, Marina on achievements recorded in the fight against coronavirus, stated that the move was to forestall any secondary incident as schools in the state prepares for resumption.

Earlier, Public Affairs Officer of Lagos State Emergency Management Agency (LASEMA), Nosa Okunbor, through a statement made available to newsmen, said that none of the school staff was within the premises when the building caved in at about 8:15 am, barely 48 hours to school resumption.

Okunbor said that the building that collapsed was part of a twin three-storey building sited on 15, Ansarudeen, Ile Epo Bus Stop, Iyana Ejigbo, and that its collapse was attributed to visible distress.

It was learnt that the distress on the structure before it came down had affected second wing and that it was already distressed with visible cracks on the walls, pillars and decking.

Okunbor said: “Information gathered from some officials of the school revealed that the building had previously shown signs of distress and the school was planning to renovate and refortify the structure.

“The three storey building has two wings conjoined, the wing that collapsed has seriously affected the second wing as visible cracks can be seen on the walls, pillars and decking.

“Fortunately, nobody was trapped, no injuries and no fatality has been recorded. Responders to the incident scene are LASEMA, LASBCA, the Nigerian Police Force (Ejigbo Division)”, the agency public affairs officer added.

One dies, two suffers burn during tanker explosion in Lagos