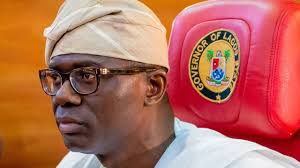 The Lagos State Governor, Babajide Sanwo-Olu, has disclosed that he held a virtual meeting with religious leaders in the state over the prevention of possible spread of the deadly coronavirus pandemic among congregations and devout residents of the region.

He said that the meeting had been necessitated by rising incidence of community transmission within the state as well as the regrettable events of notable Christian and Islamic holy months, Lenten and Ramadan, both being celebrated under coronavirus-induced restrictions.

Sanwo-Olu, who stated that his administration was committed to ensuring the well-being of all Lagosians irrespective of their religious beliefs, recalled that the decision to cancel social gatherings as well as uphold a “0-congregation” policy had been hinged on recent healthcare realities which discouraged large crowds.

The governor, through a statement released on Monday, revealed that the coronavirus crisis in the state had not abated, but had rather reached a community transmission level, thus necessitating a continuation of the ban on religious gatherings within Lagos.

He urged the religious leaders to comply with the “0-Congregation” policy and also to embark on sensitization programs to educate followers concerning the dreaded coronavirus disease and the medically advised measures for its prevention.

Sanwo-Olu said that it was pertinent that religious leaders support the state in its battle against the global pandemic by carrying out activities to complement government efforts and also through the offering of prayers for help to successfully overcome the national health threat.

In his response, the Chairman of the Christian Association of Nigeria (CAN), Lagos State Branch, Prof. Alexander Bamgbola, expressed appreciation for the state government’s drive to rid Lagos of the deadly coronavirus infection, saying that Sanwo-Olu’s proactive approach to the disease outbreak had facilitated the positive results being recorded in the state.
Bamgbola pledged the support of Christian leaders to the government’s directives and assured the governor that increased moves for sensitization and enlightenment would be undertaken by churches under the umbrella body.
Speaking on behalf of the Islamic and Muslim leaders, the Grand Chief Imam of Lagos, Engr. Suleiman Abu-Nolla, described recent events as a time of collective survival which needed the input and partnership of all Nigerians in order for the nation to overcome the coronavirus pandemic.
The virtual meeting was attended by the General Overseer, Deeper Life Ministries, W.F. Kumuyi; The Redeemed Christian Church of God, Joseph Obayemi; General Overseer, Mountain of Fire and Miracles Ministries, Dr. D.K. Olukoya; Christian Pentecostal Mission International, Rev. Mercy Ezekiel, Women Wing of Christian Association of Nigerian (WOWICAN) Amb. Mrs. Elizabeth Onajobi, as well as Samuel Kanu Uche and other leaders in the five Christian Bloc and CAN Executives.
Also present was the Chief Missioner, Ansar-Ur-Deen, Dr. Abdulrahman Ahmad, Abdulhakeem Lawal,  Abdul Akeem Lawal, Dr. Egberongbe from the Federation of Muslim Women’s Association in Nigeria (FOMWAN), Sheik Uwais, Chief Imams of the various Divisions of the State, MSSN and other top religious leaders in Lagos.