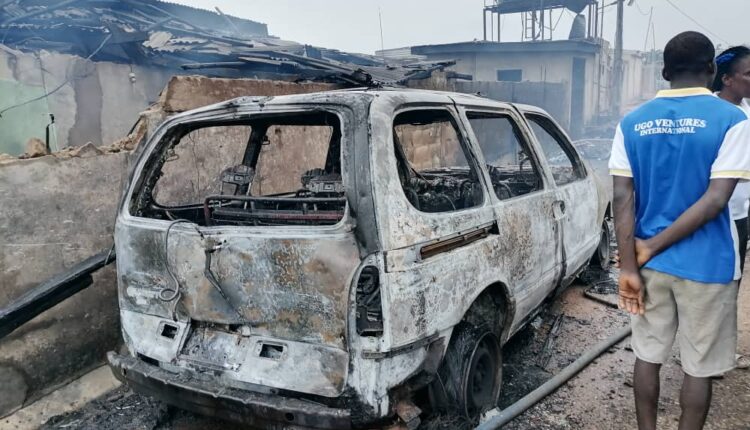 One of victims of gas explosion that rocked Iju-Ajuwon Road, Ifako-Ijaiye Local Government Area of Lagos State, has died at a hospital where all the people involved in the disaster were receiving medical attention.

As learnt, the victim, identified as Ezekiel Yomi, was said to have stopped responding to treatment and that his condition became critical before his death was reported.

The Chairman, Ifako-Ijaiye LGA, Oloruntoba Oke, disclosed that the news of the victim’s death got to his office hours after he had died and that the first-degree burns suffered by the victim led to his demise.

Confirming his death through a statement released to newsmen on Monday, Oke said hinted that he had directed immediate evacuation of some victims to government hospitals for better medical care.

The Chairman who commiserated with the deceased family over the unfortunate incident, said that 17 among the victims had been discharged while plans are being concluded for others to be discharged.

“I was at the Trauma and Burn Centre, Gbagada General Hospital to see how victims of the explosion were responding to treatments following injuries sustained, and was told about the passing of the deceased, who was said to have suffered first degree burns.

“Upon the fatality recorded, victims at private faclities, including a  six-month-old baby have been evacuated to to Ifako-Ijaiye General Hospital for proper management of their health conditions. Seventeen among the victims have been treated and discharged and the remaining seven at the health facilities were also about to be discharged,” the statement read.

Of the over 30 people that sustained varying degrees of injuries, 20 were adult males and 10 adult females residents of the community. Also, 15 shops at the community market and eight buildings including a church and an event center were destroyed during the explosion that ravaged the axis.