JUST IN: LASG lists journalists, police, others eligible for…

Lagos education board receives over 100,000 facemasks from Abiru 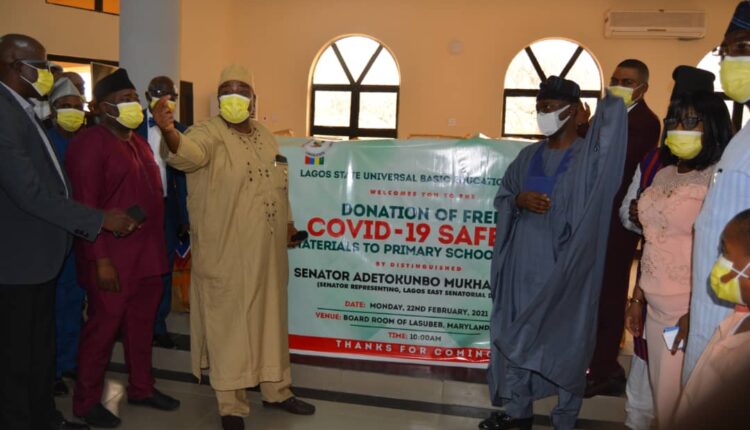 The Lagos State Universal Basic Education Board (LASUBEB) has disclosed that it had received over 100,000 facemasks and other non-pharmaceutical protective items donated by the senator representing Lagos-East senatorial district, Tokunbo Abiru, to curb COVID-19 spread in public schools.

LASUBEB stated that the donation would further support the state government’s response in its ongoing fight against the deadly respiratory disease in the state.

Receiving the items for the state, the Executive Chairman LASUBEB, Wahab Alawiye – King, stated that the safety materials donated would not only curb virus spread in schools but also reduce the spread of Covid -19 within the state.

Alawiye – King commended the lawmaker for the gesture and described the move contribution that would further boost learning in schools during the pandemic.

According to him, the best way to reduce the spread of COVID-19 particularly during this second wave is to continuously abide by the safety guidelines.

The chairman urged the Senator, who was a former commissioner for finance, to use every opportunity at the National Assembly to push for the amendment of laws relevant to Basic Education development across the country.

While handing over the safety materials, Abiru explained that the reason for the donation was that as leaders, the state cannot afford to fail children who could easily contract infections.

He stated that it was important for political leaders to protect the vulnerable segment of the society, particularly the children, against COVID-19 pandemic.

“It is suicidal to let down our guards at this point in time, we as Tokunbo Abiru constituency Team (TACT), are also complementing the efforts of the government in maintaining the COVID-19 protocol,” he added.

Abiru further commending the state governor, Babajide Sanwo-Olu, for initiating the use of technology in upscaling teachers to improve the learning outcomes in schools and the board for impacting and contributing resourcefully to advancement of basic education.

He added that his team would be intervening by providing eye-glasses to teachers within his senatorial district in other to improve their vision, after a formal eye examination.