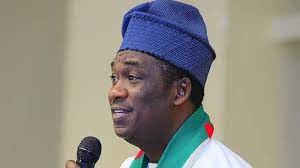 The Lagos State Deputy Governor, Dr. Obafemi Hamzat, has charged traditional rulers to facilitate as well as develop infrastructural projects that could boost the standard of living within their domains across the country.

Hamzat said that engaging in infrastructural development within their communities remains a veritable means of partnering and supporting the governments especially Lagos state government, in its drive to reduce the infrastructure deficit.

According to him, the role of traditional leaders is to ensure peace and unity in the community, l, therefore, call on the people of Iba to join hands with their leaders to make things work for their betterment, he said

The deputy governor, meanwhile, commended the monarch, who is the Chairman of tricycle/Okada operators under the Road Transport Employers Association of Nigeria (RTEAN) for all the development projects embarked upon after ascending the throne of his forefathers.

Hamzat told the gathering that the traditional ruler, after receiving his staff of office, has embarked on meaningful projects across the kingdom, adding this can only be achieved in a peaceful environment.

In his address, the Ayangburen of Ikorodu, Oba Kabiru Shotobi, commended the Iba monarch for the achievements recorded across the kingdom under his leadership, saying you have been working, you need to do more for the people and the state.

“Within a year, we have seen what the Oniba has done for his people. He has done well in one year. He is one of us in RTEAN and we respect him a lot also in the union,” Musa added.

Musa, who applauded the Lagos State Government for road infrastructure in the Iba LCDA, urged the Babajide Sanwo-Olu led administration to open up other communities through the construction of inner roads and other critical facilities across the council.

The celebrant, Raji commended the people of Iba Kingdom, traditional institutions, and the Lagos State Government for the support he had received within his first year on the throne, just as he described it as unquantifiable.

Raji, who urged the youth to embrace education and be peaceful, said that he would stop at nothing to better the lives of his people and bring more development to the kingdom.