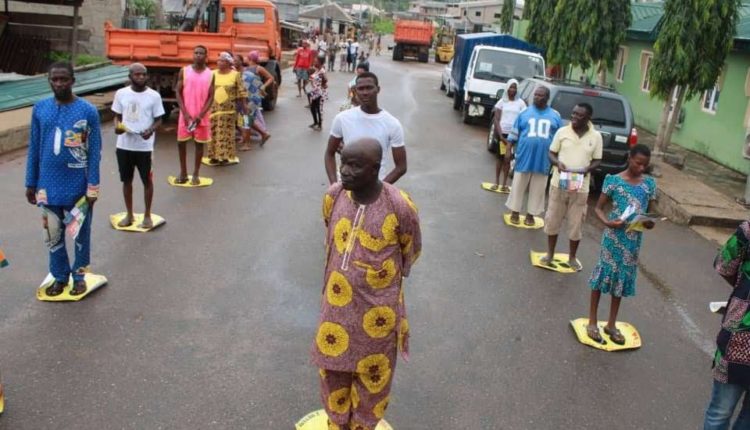 The Lagos State Government has urged residents to strictly engage in personal hygiene, social distancing and other coronavirus preventive measures to avoid community transmission of the disease in Lagos.

It explained that the resident’s adherence to preventive measures outlined by medical experts would further assist the government to flatten the curve of the viral infection in the state.

The appeal was made by heads of the Lagos State Covid19 Task Force, Dr. Dolapo Fasawe and Lanre Mojola, during the team’s visit to palace of the Oloja of Epe, Kamorudeen Animashaun, on Monday, where they demonstrated how residents should engage in social distancing and other coronavirus preventive measures.

The heads of the team stressed that it was imperative that Lagosians embrace social distancing, as well as regular hand washing, in order to aid the government in its fight against the deadly global pandemic.

Mojola, who is Lagos State Safety Commission (LSC) boss, added that the people should employ frequent use of alcohol-based hand sanitizers,  and also ensure that frequently touched surfaces are kept clean so as to prevent occurrence of the viral infection.

He argued that measures such as self-isolation should be practiced by residents and encouraged Lagosians to call on appropriate agencies in cases where suspected patients present with coronavirus symptoms including coughing, sneezing, fever and breathing difficulty.

On her part, Fasawe also encouraged the people to increase adherence to government directives and stated that the task force would enforce implementation of the state guidelines on social distancing and self-isolation.

Fasawe, who also doubles as General Manager of Lagos State Environmental Protection Agency(LASEPA), added that they would sensitize Lagosians on importance of the preventive measures with an aim to increase their understanding of the state government drive to secure each resident.

She said that in line with the Sanwo-Olu led government mandate, food stimulus packages had been made available to cater to over 5000 families in the region, and that the packs had been handed over to Community Development Leaders to facilitate its distribution to indigent members of the society.

In response, the traditional ruler, Animashaun, expressed his appreciation to the state government for the kindness shown to his people and the residents of Lagos state as a whole.

He urged the joint task force to continue in its mandate to ensure health and safety of Lagosians and pledged to support Sanwo-Olu in the fight against the deadly global pandemic.