The Chief Coroner of Lagos, Justice Mojisola Dada, has ignored the advice of the Directorate of Public Prosecution (DPP), exonerating the 10 students and staff of Dowen College, Lekki linked to Sylvester Oromoni’s death and declared that judicial investigations on circumstances surround the boy’s demise would go head.

Dada has directed the Coroner of the Epe District of Lagos, Magistrate Mikail Kadiri, to go ahead with the inquest into what led to the 12-year-old Sylvester’s death in the state.

The Chief Coroner, in a letter signed by Kadiri, and sighted on Thursday, said that the inquest would commence next Saturday, 15th of January at the Magistrate Court No. 4, Chambers of the Coroner, Epe District, Combined High Court, and Magistrate Court of Lagos State, Epe.

In a letter dated, 4th January, 2022, and addressed to the law firm of Falana & Falana, the legal practitioners to the Oromoni family, the chief coroner said that the investigations would commence by 9:00 am prompt.

She assured the legal firm that the hearing on the former student’s death that occurred about two months ago would be held in an open court for all parties including members of the public to witness the discussions.

Dada also reminded the counsel to the deceased student’s family to file and serve depositions of all witnesses they intend to call during the judicial investigations. 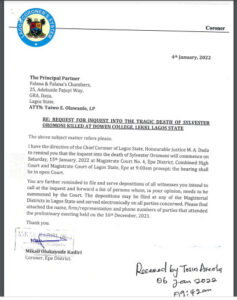 According to the chief coroner, the legal representative of the Oromoni’s should also forward to the coroner a list of persons who in their opinion, need to be summoned by the court for questioning.

She added that the depositions by the counsel could be filed at any of the magisterial districts in Lagos and served electronically on all parties concerned in the case.

In response to the demand, Justice Dada had earlier assigned Magistrate Kadiri to write the law firm on December 7th and also gone ahead to fix a preliminary meeting for December 15, 2021.

It would be recalled that on December 6th, last year, the law firm of Falana & Falana wrote Justice Dada, and demanded that an inquest be conducted on the case.