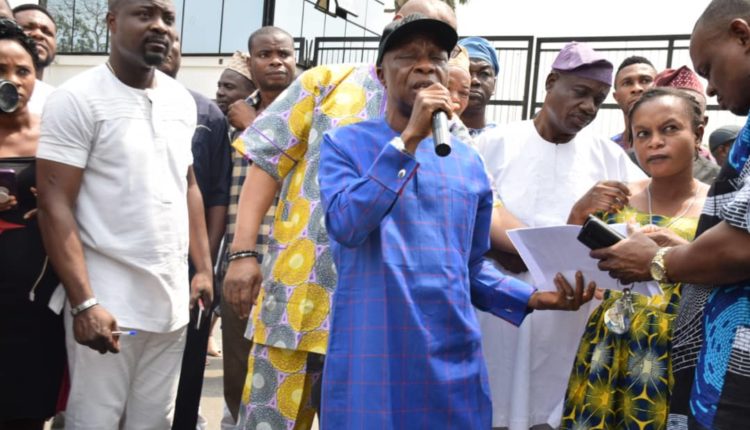 Motorcycle riders registered under Lagos’s popular ride hailing apps, Gokada and MaxiNg, staged a protest in front of the Lagos State National Assembly Complex to register their displeasure of ban instituted on all commercial motorcycle activity on major roads and in 15 local governments of the state.

It would be recalled that the ban, which was recently placed by the state government, had enforced mortocycles and tricycles not to ply all major roads  in Lagos state, as well as restricting their movement on bridges and in select local government areas.

The aggrieved riders had, on friday, gathered in Lagos, to submit their petition to the government and request that ban be lifted so they could continue their business activities, which they described as lawful and a necessary part of the state’s transportation system.

With bold slogans printed on banners to pass accross their messages, the protesters had chanted, “Regulate, No ban!!!”, and implored government to assent to their plea.

The Guild had spoken with one of the protesters who identified himself as Charles said that, “We are here to try to reason with government. We are not troublesome people, our aim here is to make our plea known to Governor Sanwo-Olu to please lift the ban, this is the business we feed our families with”.

Another unidentified protester had addressed pressmen gathered at the site of protest, saying:

“We are begging, we cannot do without our work as it is the only one we have. We are not robbers, we are legal and our work is legal. We are not doing illegal work, please goverment, answer us. We are pleading. we voted the government in, we cast our votes in favour of Sanwo-Olu. We call on Babajide Sanwo-Olu to help us”.

The Lagos House of Assembly Speaker, Hon. Mudashiru Obasa, represented by Hon. Bisi Yusuf of Alimosho LGA, had received their petition and assured that government would deliberate on all issues that had been raised by the protesters, and that they would receive further communication as to decisions taken.

Yusuf had appealed to the protesters to maintain decorum as they had since beginning protest and assured that Sanwo-Olu was responsive, and as such, decisions would be taken in a short while.

“We will deliberate on it and will know the reasonable things to do, but pending that time, please, conduct yourselves the way you have done today,”

“Do not let anyone highjack your protest because if you do, you all will be held responsible for it. You have all exhibited a high level of decorum, and I must say that it is quite impressive,”

“The government has made pronouncement on this issue, keep to the law and do not ply routes from which you have been banned untill deliberations are concluded”.

“You all are stakeholders in this matter and will be treated as such, so, once decisions have been made you all will be invited to sit and discuss matters with government”.

He hinted that good conduct of the protesters would put their petition in a better light before the government and emphasized that they should not take law into their hands, rather, to obey government pronouncement of ban till issues were sorted out.

The Guild noted that riders from popular app OPay were absent from the protest. It was gathered that this had caused dissatisfaction from other attendees, who had argued that the protest was to request government sympathy for all motorcycle hailing apps, including OPay.

An Opay rider, who requested to remain anonymous, had aledged that they had not been part of protest because there had been no directive to that effect from their company, and that OPay had alledgedly gone ahead to make some payments and plead for cancellation of ban but had been rejected by the government.