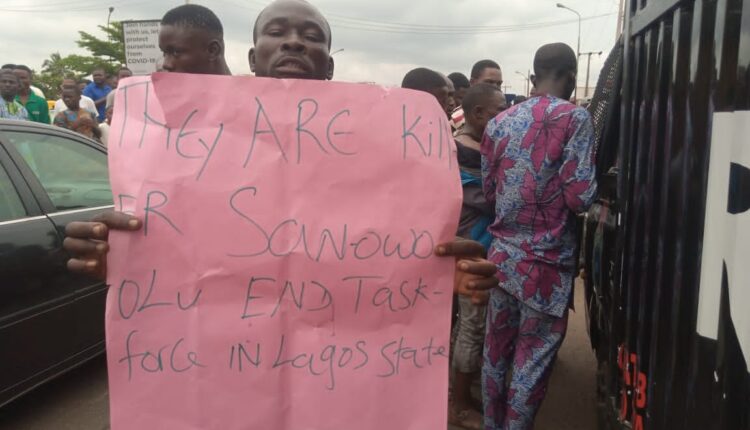 Thousands of commuters were left stranded across major parts of Lagos State after commercial bus operators popularly called Danfo drivers withdrew their services in protest over the alleged killing of their colleagues by officers of the State Environmental and Enforcement and Special Offences Unit (Taskforce).

This development, as early as 6.30am, led to a chaotic situation in the axis, as workers and other commuters were seen trekking due to the scarcity of buses.

After withdrawing their services, the drivers also mounted roadblocks on the roads, obstructing traffic flow and expressed their grievances against the law enforcement personnel mode of operations.

The drivers were seen on Tuesday to have occupied the LASU-Isheri road, Ikotun and Idimu roads, demanding justice for their colleague who was said to have been killed by Taskforce officers while repairing his vehicle with number plate LSD 659 XU, at a Bus Rapid Transit (BRT) shed in Iyana Ipaja yesterday. 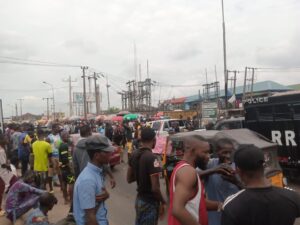 As gathered, none of the law enforcement officers was found on the road as traffic inspectors and other security operatives known to be stationed in the area were also not seen at the time of visit.

A bus driver, Ikenna John, said that the protest was to end extortion and poor treatment of commercial drivers by security operatives, especially task force agents, adding the protest may continue on Wednesday and for the rest of the week.

“They killed a mechanic at Iyana Ipaja and that is why I and others are here protesting as well as asking others that have not withdraw their services to also do so for us to get justice for the deceased driver.

“And it would continue tomorrow and probably for the rest of the week. We are saying enough is enough. These task force guys should stop killing us”, he added.

Speaking with newsmen, one of the protesting drivers, Kayode Oloye, stated that “we decided to withdraw our services today to protest the illegal activities as well as bring it to the notice of Governor Babajide Sanwo-Olu and relevant authorities so that they can call the task force men to order.

“Enough is enough; we can’t take the nonsense anymore. The economy is unfavourable to everyone. We are struggling to feed our families and not feed government or task force men under the pretext of committing one tragic offence or the other. We work hard to earn our living. We are not armed robbers. That is why we are doing legitimate work. Or they want us to take to do robbery?”

Responding, the Chairman of Taskforce, Shola Jejeloye, said that the agency would not abdicate its statutory duty of enforcing traffic laws in the metropolis because of penchant disregard of some motorists to traffic laws in the state just as it debunked fake news that its personnel killed a driver and a conductor.

Jejeloye explained that what led to the protest by commercial drivers on LASU/Iyana Iba was an attempt to escape arrest by a danfo driver who on sighting the operative of the agency in Iyana – Ipaja yesterday sped off and hit a broken-down bus.

He added that the broken-down vehicle on impact injured a technician who was repairing it. The technician, he noted was taken to the hospital immediately where the injury was treated and discharged the same day.

The Taskforce boss emphasized that there is no truth in the fake news that Lagos State Taskforce killed a driver and its conductor, noting that such an incident never happened anywhere in the State.

The chairman stated that he has been meeting with key stakeholders in the axis to ensure that commuters are not made to go through harrowing experiences as a result of the protest.

Jejeloye while urging the officers to remain focused and dedicated to their duties reminded them of the primary duty of law enforcement and safety of lives and property.

He stated that Government repose so much power in them and that they must therefore learn to be professional in the discharge of their duties.

Jejeloye noted that in view of the awareness of the need to comply with traffic laws in the State, a lot of motorists still flout such laws endangering the lives of other road users.