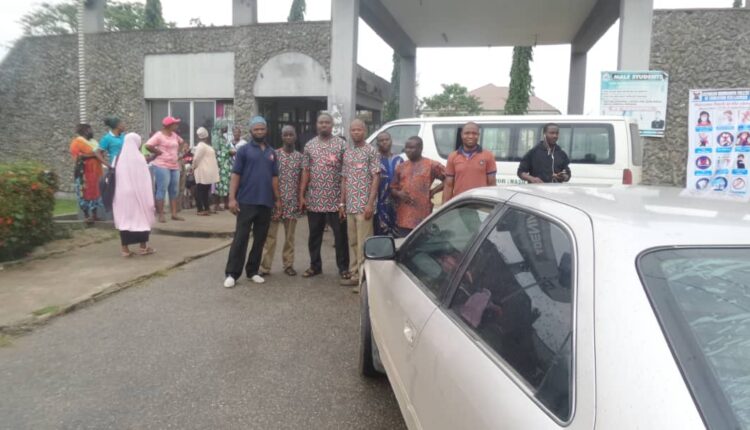 Academic activities at the Adeniran Ogunsanya College of Education (AOCOED), barely 24/hours after resumption, has been brought to a sudden halt by staff that barricaded the institution entrance over unpaid minimum wages.

The staff were said to have blocked the school gates early in the day with a claim that the institution’s management was not sincere on payment of the new minimum wages.

As gathered, the aggrieved staff were said to have earlier decided to embrace dialogue and not adopt strategies embraced by their colleagues in other institutions in demanding for accurate payment of their wages.

Also, the staff earlier decision was said to have been reached as a way to protect students in terminal classes that were yet to write their examinations in the institution.

The Guild gathered that the earlier decision has been put aside by staff after efforts to get AOCOED management to dialogue on when payment of the new wages would be effectively paid and other benefits cleared.

During the meeting, management was said not to have an affirmative response and that the staff decided to halt academic exercise.

It was learnt that the protest that has halted academic activities was led by the Non-Academic Staff Union (NASU) of AOCOED who was said to have prevented entrance into the institution.

The protesters were said to have locked the gate at about 6: 00 am to ensure academic, non-academic and students do not have access to the premises which the staff believe would compel the institution management to accept their demands.

This action was said to have made returning students and staff of AOCOED to either return home or join the protesters in their agitation for the implementation of minimum wage in the institution.
Addressing newsmen during the protest, Chairman, NASU, Badmus Adesola, and the union secretary, Adelakun Segun, said that the staff agreed to embark on strike from Tuesday, September 15, until the state government start the implementation of the new minimum wage.
It was learnt that NASU congress held yesterday deliberated on the non-payment of the new minimum wage to staff in tertiary institutions in the state and ratified the directive of the Joint Action Committee (JAC) for the four state-owned institutions to embark on strike.