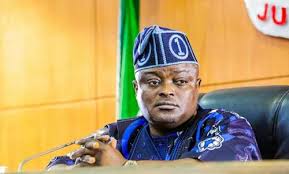 The Lagos State House of Assembly has disclosed that it will intensify its efforts in investigating the activities of illegal dredging companies within the borders of the state, saying that such practices pose a risk to the environment and ecosystem.

It said that an additional two-week period has been approved in which the Ad-Hoc Committee on dredging would continue investigations with aim to note and divulge all of the fraudulent activities which have been going on within the sector.

The Speaker of the House of Assembly, Mudashiru Obasa, who approved the two-week investigative period during plenary on the floor of the house, stated that such extension had been necessitated by the need to conduct thorough assessments of the processes and procedures of dredging in the state.

He said that the 14-day continuation of investigations would allow the committee to conduct an in-depth analysis of dredging activities in Lagos.

In his submission, the Chairman of the Ad-Hoc Committee on Dredging, Victor Akande, revealed that the committee had uncovered various fraudulent activities prevalent in dredging within the state.

Akande, who expressed satisfaction with the two-week investigative extension, stated that illegal dredging activities were largely conducted across the state without the remittance of appropriate levies to the state government coffers.

“Many of these dredging companies do not pay revenues into the coffers of the state government and they go beyond the areas approved for their dredging activities even when they pay. This matter needs serious attention and the Committee would need two more weeks for adequate inspection into their conducts”, he said.

Another member, Rasheed Makinde, noted that the activities of illegal dredgers in the state contravened human rights as well as environmental rights, saying that such exploitation had destroyed the aquatic ecosystem as well as the environment.

According to Makinde, illegal dredging had undermined the state government’s efforts at environmental protection and was being made worse by the non-payment of legislated fees to the state.

On his part, the Chairman of the House Committee on Finance, Rotimi Olowo, stated that it was pertinent that dredging companies make adequate revenue remittances to the state coffers as at when due, as such payments went a long way to boost the economy of Lagos.

Olowo also noted that due to the sensitive nature of the investigations with which the seven-man committee had been saddled, it was advisable that security operatives be provided for the protection of the lawmakers during discharge of duties.

He said that the committee should be guarded by policemen when going on inspection and investigative visits to various dredging sites across the state.

Lawmaker, Desmond Elliot, in capacity as a member of the Committee on Dredging, stated that several water channels in Lagos state had been blocked as a result of the illegal operations which were ongoing within the region.

He said that the irregular channelization of several areas had resulted in the obstruction of many water channels across the state.

After the submissions, the Speaker directed the Clerk of the House to write a letter to the Lagos State Commissioner of Police to give support to the Committee during their inspection of the dredging sites.