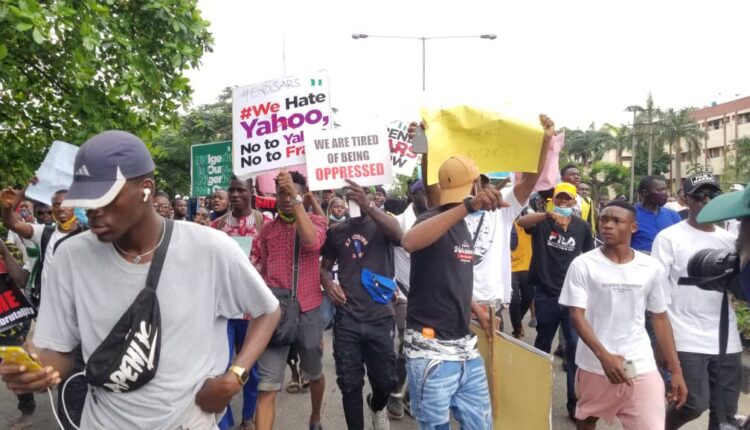 The ongoing protests against Special Anti-Robbery Squad (SARS) unit of Nigerian Police over continued harassment and intimation of citizens that started in Lagos State has spread to major cities across the country, compelling state governments to take a decisive stance against the actions of the law enforcement unit.

Aside from the protests spreading to other states, it had taken a new twist with politicians, celebrities, and mothers whose children were victims of extra-judicial killings and harassment from SARS officers marching on streets in Nigeria to demand that the Federal Government proscribed the law enforcement unit.

The protesters, who blocked Alausa, Ikeja end of Lagos-Ibadan expressway, took to streets in Federal Capital Territory (FCT) Abuja, Imo, Ekiti, Oyo states, in their different locations were armed with different placards and other sundry items that could be used to express their displeasure over the action of SARS over the years.

Some of the placards displayed by the protesters reads: ‘Stop killing the leaders of tomorrow, Looking good is not a crime, we are tired of being oppressed,’ and in addition to the items, the protesters particularly the mothers chanted different rhymes to signal their disapproval for the continued existence of the law enforcement agency in Nigeria.

The women, who took to the street in Ogba axis of Lagos, were seen appealing to the Federal Government to address their complaints on SARS which the protesters accused of killing breadwinners of their families.

Also in Lagos, dozens of protesters were said to have passed the night at the entrance of the state Governor’s office and House of Assembly after rejecting a plea from the speaker, Mudashiru Obasa, who addressed the participants at about 1:00 am on his return from Abuja.

The aggrieved protesters, in their letter, described the actions of FSARS officers as a clear abuse of power by the law enforcement agency and demanded that the apex government disband the unit and restructure the Nigerian Police for effective security in the country.

After efforts to pacify the protesters proved abortive, the speaker assured the aggrieved residents that the 40 lawmakers would convey an emergency plenary session to listen to complaints and other grievances against the law enforcement unit.

Also, another group of protesters took to the Alausa Secretariat end of the Lagos-Badagry expressway and blocked the road for several minutes and pacified motorists to join the ongoing protests on SARS proscription.

In Ekiti State, hundreds of youths stormed the palace of Ewi of Ado Ado Ekiti, Oba Rufus Aladesanmi, to express their displeasure against extortion and brutality particularly from SARS in the state.

The protesters, majorly youths, demanded that the monarch should inform the state Governor, Dr. Kayode Fayemi, who was the Chairman of Governor’s Forum, that their message was SARS should be totally banned in the country.

In Ibadan; Oyo state, Ilorin; Kwara state, and other major cities, the protesters converged at different locations kicking against any plan to allow the SARS unit continue operation across the country.

While the protests were successful in other parts of the country, the situation was different in Abuja, seat of the nation’s capital, where the protesters were dispersed by the Nigerian Police over alleged improper conduct during the march.

In fulfillment of the promise to the protesters, the Lagos State House of Assembly resolved that the Federal Government should proscribe the law enforcement unit under the Nigerian Police and introduce a well-structured security outfit for the country.

It further demanded that the National Assembly institute a public inquiry on the extra-judicial killings and dehumanization of youths by the anti-robbery squad and that the victims compensated while erring officers sanctioned.

The House, after the special plenary presided over by the Speaker of the House,  Mudashiru Obasa, to address the petition of the protesters including traders and youths, called on the Commissioner of Police, Lagos Command, Hakeem Odumosu, to provide protection for the protesters while they express their grievances.

In the communique issued after the session, the lawmakers further asked that President Muhammadu Buhari should ensure that culpable officials of SARS receive the punishment that would be prescribed by the National Assembly after its investigation.

Other demands include: “The Governor of Lagos State, Babajide Sanwo-Olu engage relevant institutions to protect lives and property in the state such that phones, laptops and other means of communication belonging to youths are not confiscated indiscriminately without a warrant.

“Committee on Judiciary, Human Rights and Public Petitions liaise with the Commissioner of Police and Attorney General of the State to fashion out ways and means to address allegations of ruthlessness and extrajudicial killings contained in the petition against SARS in the state.