Taliban readies to takeover Kabul airport once US complete… 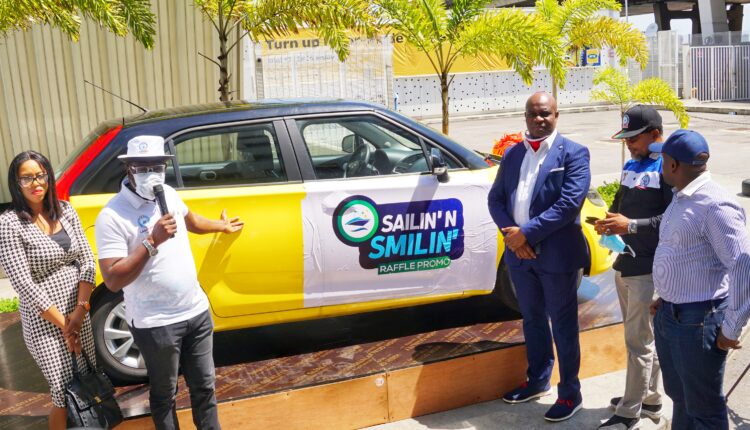 The Lagos State Ferry Service, (Lagferry) has disclosed that it would be rewarding loyal passengers and frequent riders taking advantage of the state’s waterways to ease traffic on roads across Lagos with vehicles, home appliances, including television sets, microwaves among other prizes, and that as its ridership increases, more mouthwatering promo would be rolled out.

The prizes which include a Coscharis car as the highest on the list of the newly introduced reward system was said to have been part of the incentives rolled out by management of the transportation arm in wooing Lagosians to abandon road mode of transportation for hassle free commutting on water on all available routes.

While the management noted that the service would be working towards commuting no fewer than 480,000 Lagosians daily to their various destinations through the waterways, it stated that it would also be giving back to the passengers through various prizes on offer in the quarterly promo tagged ‘Sailing and Smiling’ for frequent riders and passengers.

The Managing Director of Lagffery, Abdoulbaq Ladi-Balogun, said that the rolled out prizes, in addition with recent increase of the service boats to 20 were part of the Governor Babajide Sanwo-Olu-led administration to ensure an efficient multimodal transport system that could aid road decongestions and reduce travel time within the state.

Addressing a press conference yesterday at the service office in Ikoyi, the Lagferry boss added that the service under the current administration was ready to double its investment on waterways transportation and put in necessary measures, like the quartely reward system been introduced, among others that would attract and assure Lagosians that water transportation remains viable and can solve daily gridlock being experienced by commuters on Lagos roads.

According to him, the aim is to bring ease on human movement and business opportunities through waterways in line with the governor’s aim of making Lagos a 21st century economy hub and while that is being done, customers are also getting reward for their loyalty.

Ladi-Balogun added that the new addition of boats to the service’s fleet, and others been expected coupled with zero record of accidents by Lagferry boats were testament of the government commitment to make waterways transportation safe and best alternative to road mode of commuting.

“Now we have a total of 19 passengers boat and one cargo batch in the fleet of Lagferry. This was made possible by commitment of the state Governor Babajide Sanwo-Olu, to ensure that commuting on waterways become easier and something very attractive to Lagosians with the prizes been introduced today.

“This is furtherance to the fact we have to decongest the road for traffic and we have to encourage people to come on waterways. So this promotion and prizes being introduced is to encourage Lagosians to come on waterways and see it as an option and very reliable alternative to road transportation. It is a way of motivating and encouraging our riders on the waterways and by having this kind of promo to reward them in our own way of giving back to the consumer,” Ladi-Balogun said.

On achieving the 480,000 ridership daily, the Lagferry boss noted that “we are targeting 30 percent (480,000) of 1.6 million commuters on the road on daily basis and we hope that achieve that by increasing our fleets and that exactly what we are doing after a year of operation, we are doubling our fleet and we are looking forward to private sector partnerships and we have a lot of schemes where we can accommodate interest of private sector and it can be in terms of leasing, BOT and also in terms of acquiring the fleet and giving us to operate for them.

“They (private sector) can also come into the sector as another player entirely to be an operator in the sector. The enabling environment is being created by the government and we are looking forward to such partnership and collaboration so we can jointly decongest our roads from the burgeoning population of Lagos residents,” he said.

On his part, the General Manager, Marketing and Corporate Communication, Coscharis Group, Abiona Babarinde, said that his company had partnered with the government to ensure Lagosians become proud car owner by patronising the government owned ferry services.

He noted that the collaboration had been formed to ensure citizens get back something in return by getting value for their money and testify to projects their collective tax are been expended on in an open and transparent manner.

“We always partner state governments wherever we operate and we collaborate to ensure the citizens get something back in return and the whole initiative is to add value to Lagosians via waterways transportation platform.

“It is to give Lagos residents, irrespective of age, religious, ethnic or political differences an opportunity to become a proud owner of Choscharis vehicle. It is a perfect collaboration for us and we are proud to be associating with this initiative,” Babarinde said.

In his goodwill message, the Chairman, Ikoyi, Obalende Local Council Development Area, Fuad Lawal, noted that the initiative would be a win win situation for both the service and passengers and that the customer base would increase through the promo.

He commended the partnership between the government and Coscharis Group, noting that such would make life easier for Lagosians, particularly residents in Ikoyi, Obalende and its environs.