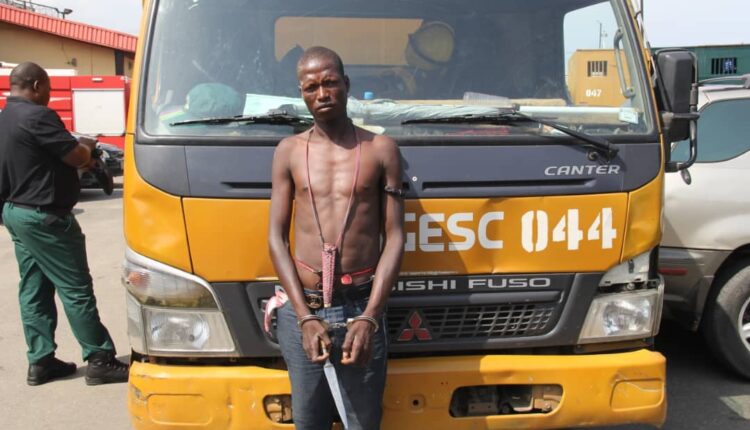 The Lagos Environmental Sanitation Corps (LAGESC) has arrested a petty trader, Yusuf Usaini, for attacking officials of the agency during an environmental law enforcement exercise around the Railway Crossing axis of Fagba in Ifako Ijaye Local Government.

Usaini, a 30yrs-old who was identified as a popcorn trader, was said to have been arrested after attacking the law enforcement officials with different weapons, which was basically to prevent the LAGESC personnel from effectively performing their primary responsibilities.

As gathered, the petty trader was subdued and arrested at about 12:30 pm on Monday by the personnel on enforcement exercise and was transferred from the scene to LAGESC headquarters in Oshodi where he had been handed over to Nigerian Police, Lagos Command for onward prosecution.

The Corps Marshal of LAGESC, Gbemisola Akinpelu, who confirmed the arrest, narrated that upon sighting the agency’s operatives, the suspect brought a knife as well as charms and attacked the officials before he was eventually subdued and brought to the agency’s Headquarter for subsequent investigation and prosecution.

While arguing that the suspect was arrested and handed over to the police to serve as a deterrent to others, Akinpelu, a retired Commissioner of Police, cautioned Lagosians against attacking operatives carrying out official duties to ensure the general cleanliness of Lagos. 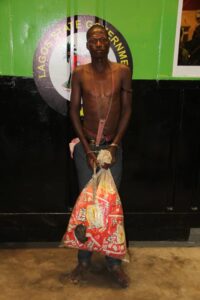 The former commissioner, through a statement by the agency’s spokesperson, Adebayo Kehinde, further reiterated the agency’s commitment to rid the state of all environmental nuisances such as street trading and hawking on the major highways.

While affirming the agency’s commitment to enforcing the directive of the State Governor, Babajide Sanwo-Olu, of ensuring that every part of the state was free of any form of environmental nuisances, she, however, appealed to market leaders and transport unions to partner with the LAGESC in the discharge of official duty.

“We condemn these incessant attacks which can inflict serious injuries or loss of lives to the officers who are out to ensure the directives of Mr. Governor, Babajide Sanwo-Olu towards ensuring that our roads, walkways, and road setbacks on major highways in the state are free of illegal trading activities and street hawking which mostly impedes free human and vehicular movements that often constitutes traffic gridlocks on our roads,” she added.

Just In: Switzerland edges out France through penalty shootout