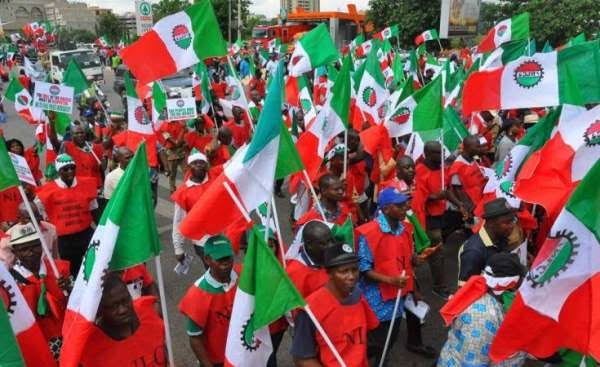 Share
After hours of closed door meeting with Federal Government representatives, the
Nigeria Labour Congress (NLC) and the Trade Union Congress (TUC) have suspended the strike scheduled to commence on Monday over rejection of fuel and electricity tariff hike.
The suspension followed an agreement reached with the Federal Government that it suspends implementation of electricity tariff and that a technical committee comprising representatives from Ministries, Departments, Agencies, NLC and TUC be set up for a duration of two weeks effective September 28, to examine the justifications for the new policy.
In the communique signed by the representatives of the government and labour unions and read by Minister of Labour and Employment, Chris Ngige, the parties agreed that electricity distribution companies should reverse application of the cost-reflective electricity tariff adjustments pending outcome of the committee.

According to the communique, members of the committee would include the Minister of State Labour and Employment, Festus Keyamo (SAN) as Chairman; Minister of State Power, Godwin Jedy-Agba; Chairman, National Electricity Regulatory Commission, James Momoh; Special Assistant to the President on Infrastructure, Ahmad Zakari as the Secretary.

It stated that the committee’s terms of reference were to examine the justification for the new policy on cost-reflective electricity tariff adjustments; to look at the different DISCOs and their different electricity tariff vis-à-vis NERC order and mandate; examine and advise government on the issues that have hindered the deployment of the six million meters, among others.

The five-page document noted that the FG has fashioned out palliatives that would ameliorate the sufferings that Nigerian workers may experience as a result of the hike in cost electricity tariffs and the deregulation of the downstream sector of the petroleum industry.

It added that the proposed palliatives by the government would be in the areas of transport, power, housing, agriculture and humanitarian support.

The parties agreed that a specific amount would be unveiled by government in two weeks’ time and that it would be isolated from the Economic Sustainability Programme Intervention Fund.
“This fund should be accessible to Nigerian Workers with subsequent provision for 240,000 under the auspices of NLC and TUC for participation in agricultural ventures through the CBN and the Ministry of Agriculture. The timeline will be fixed at the next meeting.
“Federal Government will facilitate the removal of tax on minimum wage as a way of cushioning the impacts of the policy on the lowest vulnerable and available to organized labour 133 CNG/LPG driven mass transit buses immediately and provide to the major cities across the Country on a scale up basis thereafter to all States and Local Governments before December 2021″.
To reduce housing deficit, the parties agreed that 10 percent of the ongoing housing projects across the country should be allocated to Nigerian workers through the NLC and TUC.
After the meeting, President of TUC, Quadri Olaleye, who confirmed the development, said that the suspension was for two weeks, just as he assured Nigerians that all efforts would continuously be made by the unions to ensure protection of workers interest.
Olaleye said: “We just left a press conference. We signed a document to suspend the action for two weeks for the government to implement those things that we agreed in the agreement. So, we are suspending for two weeks”.