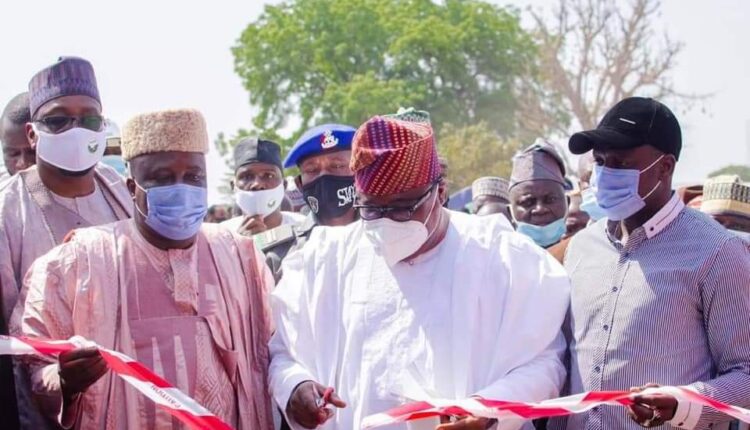 The Kwara State Governor, AbdulRahman AbdulRazaq, has flagged off the construction of 700 kilometres of rural roads worth $60 million aimed at deepening access to agrarian communities and markets across the state.

He indicated that the projects which was under the Rural Access and Agricultural Marketing Project (RAAMP) in Kwara State had been considered to bring development closer to the people and boost local economy.

AbdulRazaq hinted that the projects would be carried out in partnership with the World Bank and other international donor agencies to fastrack its completion and eliminate all stumbling block in the area of finding.

“The government will also carry out backlog maintenance on 200 kilometres of road, five river crossings will be fixed, while some existing markets will be upgraded to hubs.

“All of these are to be done in partnership with the World Bank and other international donor agencies. The projects are worth US$60m and would be spread across the 16 local government areas of the state in phases,” AbdulRazaq said while performing the flag off of 5.2km Alapa-Arobadi pilot road in Asa Local Government Area of the state.

Represented by the Deputy Governor, Kayode Alabi, AbdulRazaq said that his administration has so far paid N400m counterpart funds for the RAAMP to make the huge interventions possible.

“I commend the World Bank and the International Donor Agencies for their support. I also thank the Ministry of Works and Transport, the State Project Monitoring Committee (SPMC) and the State Project Implementation Unit (SPIU), among others, for their hard work and commitment,” he said.

“We cannot claim to promote food security or seek investments from outside when the roads that lead to farmlands and other agricultural settlements are in bad shape. We cannot claim to seek brighter future for future generations when our schools and other enabling infrastructure are in shambles.”

The state’s House of Assembly Speaker, Salihu Yakubu-Danladi, described the initiative as laudable as it would open up rural areas and improve socioeconomic activities in the hinterlands.

“I want to appeal to the National Coordinator of RAAMP to continue to give maximum support to His Excellency Mallam AbdulRahman AbdulRazaq in opening up our rural roads. As a legislative arm, we are promising our continued support to the government in this regard,” he said.

In his remarks, the National Coordinator of RAAMP, Engr Aminu Muhammad, commended AbdulRazaq for his exemplary leadership in paying counterpart funds for the RAAMP initiative, promising to offer the needed technical support to the state.

“Kwara State is the first among the 13 participating states in Nigeria to commence the 6-7 years with expected credit of $60m for each state. RAAMP will no doubt transform the rural lives in Kwara State,” Akorede said.