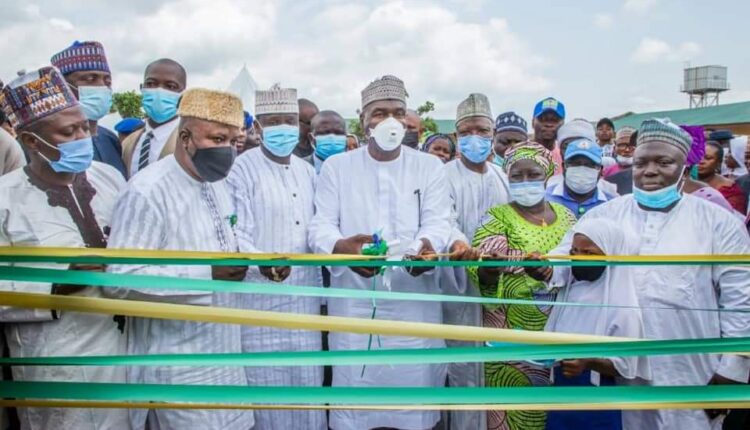 As part of measures aimed at ensuring a conducive learning environment for students across Kwara State, the State Governor, AbdulRahman AbdulRazaq, has flagged off infrastructural projects that would cover rehabilitation of 600 schools in the Kwara.

The governor said that the projects are a combination of the 2014 to 2019 Universal Basic Education Commission-SUBEB interventions that got stuck following the inability of previous administration to fulfill its obligations as well as the alleged diversion of matching grants it received in 2013.

Apart from this, he noted that some 1335 classrooms would be rehabilitated across the state and that the government would also dig 89 boreholes and construct 78 pour-flush toilets. Some 29005 units of student furniture and 7,474 units of teachers’ furniture would also be provided.

AbdulRazaq noted that the projects would ensure a new page in the history of basic education was turned across the state after many years of being on the official blacklist of the Federal Government.

Speaking at the flag-off ceremony in Otte town of Asa Local government on Thursday, the governor listed the projects to include statewide wholesale remodeling of schools, construction of new classrooms, rehabilitation of existing ones, construction of water, sanitation and hygiene (WASH) facilities, information and communication facilities, and training and retraining of teachers.

According to him, nearly one decade after meaningful investments in basic education infrastructure stopped across our state, we are this morning flagging off massive construction, rehabilitation, remodeling, and furnishing of hundreds of basic schools across Kwara State.

He added that the flag-off was an outcome of a strategic new beginning between his administration and the Universal Basic Education Commission, noting that Kwara’s relationship with UBEC broke down in 2013 when the former administration allegedly diverted the matching grants for school development.

The governor stated that the development brought Kthe state to rock bottom in the area of basic education infrastructure, saying his administration had to pay back the diverted funds and saved up to access the N7bn grants that had piled up between 2014 and 2019.

“Thanks to that, we are today flagging off huge infrastructural renewals of basic schools across Kwara State. This will follow the work plan approved for Kwara by the UBEC. Kwara is evidently poised to breed a new generation of digital natives. Therefore, we will also be constructing digital literacy centers across 40 school locations. They will be furnished with computers, solar panels, generators. They can be used for CBT centers, thereby opening up the state for unprecedented ICT growth. The intervention also covers the training and retraining of our teachers.

“This is a big leap for basic education development in Kwara. However, I must mention that this may only be a drop in the ocean when compared with the level of decay we met. Never again will Kwara under us abandon its obligations to prepare our children for the future.

“I urge all the contractors and supervisors already enlisted to deliver quality jobs. These jobs will be done majorly by local contractors to boost the state economy. I assure those who did not get the contracts that there will be another opportunity very soon.

“We thank the UBEC authorities for their support and understanding when our administration reached out to end the blacklist and catch up with the rest of the country. I also appreciate every member of team Kwara for this success story. I single out the Kwara State House of Assembly, SUBEB leadership, and the entire civil service structure for their support.”

On his part, the SUBEB Chairman, Prof. Shehu Adaramaja, who commended the governor for the huge investments in the education sector, announced that over 600 schools across the state would benefit from the interventions.

“We are not going to allow shoddy jobs. We are going to ensure that quality jobs are done for our pupils and teachers. In addition, we are going to provide boreholes and other facilities in the schools. As I am talking to you, the Governor has directed that we start the distribution of instructional materials to various schools in the state,” Adaramaja said.

“What we are doing here today is to flag off the construction of four blocks of classrooms given to Otte. The project is a special one. Only 40 of such were approved for Kwara State.”