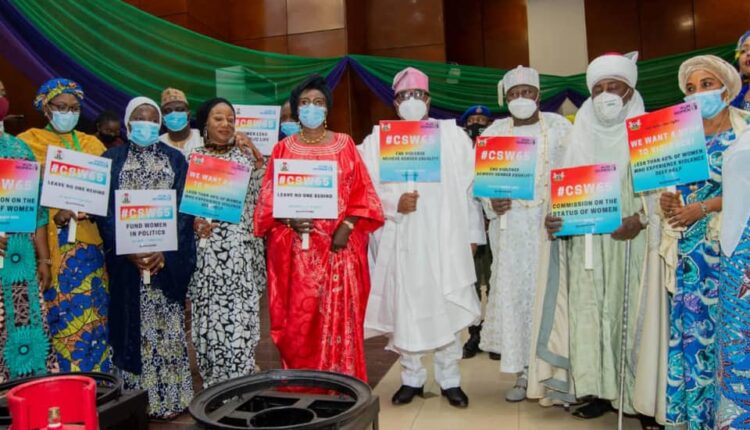 The Kwara State Government has urged private sector across the state to augment his administration’s effort in empowering women and promoting gender equality, saying women deserve patronage and support to be their best.

it explained that the move had been imperative in given women a pride of place in often men-dominated fields and areas that would engender fair play.

The state’s Governor, AbdulRahman AbdulRazaq, said that the government had prioritized policies targeted at bridging the gender inequality gap and eliminating poverty across the state.

AbdulRazaq made this known yesterday at the north-central zonal meeting of the 65th United Nations commission on women’s status in Nigeria, held at the State Banquet Hall, Ilorin.

The governor, who was represented by his Deputy, Kayode Alabi, described the theme of the meeting as timely and appropriate as it would assist women in evolving workable strategies to eliminate violence, gender inequality as well as promote women, girls’ empowerment, and inclusion in the decision-making process.

He said that the administration was one of the few in the country that has fulfilled the 35 percent female gender representation in government.

The governor, therefore, called on philanthropists, public-spirited individuals, and non-governmental organizations to support this cause through decisive interventions to support women.

Also speaking, the Minister of Women Affairs, Pauline Tallen, lauded the state government for its leading role in women’s inclusiveness in governance and being the first to host the 65th commission on Women’s Status in Nigeria.

She described the commission on the Status of Women as a United Nations entity mandated to take a leading role in the monitoring and reviewing progress and problems in the implementation of the Beijing Declaration and Platform for Action, and in mainstreaming gender perspectives in UN activities.

In her remarks, the First Lady of Kwara State, Dr. Olufolake AbdulRazaq, who was represented by the Permanent Secretary, Ministry of Women Affairs and Social Development, Afusat Ibrahim, charged women to be up and doing in waging war against any form of violence against women and also the complete eradication of poverty.

The country representative to United Nations Women Nigeria and ECOWAS, Comfort Lamptey, represented by the National Programme Officer, Patience Ekeoba, in her goodwill message praised the state government for setting the pace for others.