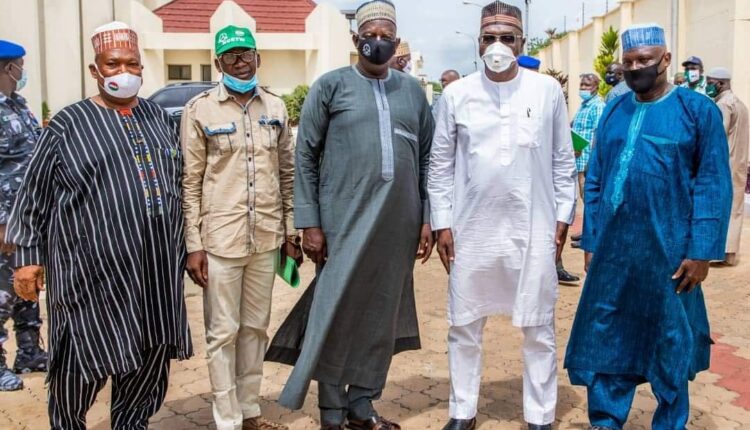 Kwara State Governor, AbdulRahman AbdulRazaq, has mandated National Union of Road Transport Workers (NURTW), and other union members across the state to embark on speed limit sensitisation campaigns aimed at educating commuters and other road users.

He added that it was important for the unions and other stakeholders to begin conscientious campaigns against excessive speed such that would reduce accidents rate across the state, adding that such would ensure avoidable loss of lives.

Speaking yesterday when NURTW leader paid courtesy visit to the governor, AbdulRazaq urged leaders of transport unions to step up their enlightenment campaigns against excessive speed.

“We are fixing old and constructing new roads across the state. I must also commend President Muhammadu Buhari for the construction of Jebba-Mokwa road. It is one of the best roads in Nigeria now. But I want to appeal to leaders of transport unions to caution their members against excessive speed. The rate of accidents on the road is alarming

“We have received complaints from FRSC and hospitals on the rising cases of accidents on the road and I want to appeal to all of you, including other road users, to be conscious on the road so as to avert accidents,” he said.

Responding to the remarks of the NURTW, the Governor commended the strategic roles the union and other Kwara stakeholders played in his victory during the 2019 governorship ballot and said the huge support explains his focus to satisfy the masses with projects directly touching their lives.

Furthermore, the governor requested the union to appoint a committee that would interface with the his administration on the requests presented to the state government.

“This administration will not neglect members of the transport sector. We know your role in the economy and we will give the support you need within available resources. So, let us have the list of members of the committee from your end that will work with us and fashion out modalities to offer assistance to members of NURTW.”

Speaking earlier, the union leaders commended the governor on his handling of security matters, protection of lives and properties, and his commitment to the welfare of the masses.

“we commend Your Excellency’s effort as regards the security of the state which allows Kwara to continue to be in harmony despite the happenings across the nation. As we implore you to put in more efforts to see to the total freedom of the state, we pray that Almighty Allah shall continue to back you up in all your endeavours,” Kwara NURTW Chairman, Abdulrazaq Ariwoola, said.

Ariwoola meanwhile appealed to the government to support the union with loan facility and give it more voice when decisions affecting the transport sector are made, saying the union appreciates the administration’s investment in road and other basic amenities.

He also applauded the state government for creating an enabling environment for NURTW to operate in the state capital and across the 16 local government areas of the state.