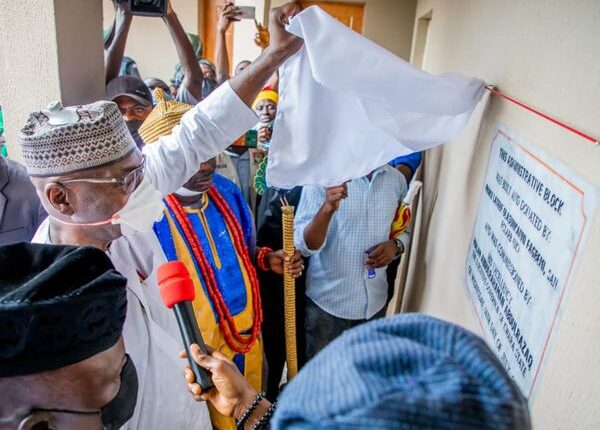 The Kwara State Governor, AbdulRahman AbdulRazaq, has disclosed that his administration was establishing an education trust fund to mobilise resources for school infrastructure, provide affordable and qualitative education, and boost human capital development across the state.

He explained that aside from the trust fund, his administration was seeking sustainable partnerships with private sector, philanthropists and corporations to fund school infrastructure, manpower development and build a brighter future for the Kwara child.

The governor noted that the trust fund was to bridge the limitations of government to shoulder the burden of infrastructural development in all local government areas of the state.

According to him, that is why we have sent Kwara State Education Trust Fund Bill to the House of Assembly. When passed into law, it will ensure contributions to schools.

AbdulRazaq spoke on Wednesday during the inauguration of a multimillion naira information communication technology (ICT) centre and a central administrative block donated to the Ansaru-ud-Deen College Ijagbo by Prince Lateef Fagbemi (SAN).

“The law will empower the state government to partner with philanthropists, foundations and corporate bodies to raise money and help support strengthening educational infrastructure in the state,” he said.

The governor commended Fagbemi for the well-equipped edifice, saying the gesture represents a major boost for human capital development in Kwara State.

“Let me commend Lateef Fagbemi’s effort in this community. This is a huge development. What else can you give to your community better than solid education? We are very grateful for this. You are not just the pride of the community, you’re an ambassador of the state. We appreciate your efforts.

“With this, you are laying a good foundation for our children. This is a major boost to our administration’s efforts to develop basic education. We appreciate it. We have also started our school projects because since 2013 there was no major investment in basic education.

“We are perplexed about how the former administration neglected education. The state was blacklisted by UBEC. So, if every community goes into this kind of (self-help) project, the sky is the limit for Kwara. We are definitely scaling up to take back our position in the north,” AbdulRazaq said.

AbdulRazaq urged other well-heeled individuals in Kwara to emulate Fagbemi and improve infrastructure in their communities for socio-economic development.

On his part, Fagbemi said that the projects were conceived as part of his social responsibility and a payback to the college, adding that the government alone cannot satisfy every demand for basic amenities from different communities.

He commended AbdulRazaq for prioritising infrastructural growth and human capital development across the nooks and crannies of Kwara, including in Ijagbo town, urging the administration to consider tarring the road leading to the school and the six-kilometre road linking Aperun, Adeleke and Ayeni communities within Ijagbo Ward of Oyun local government.

The TIC Chairman, Oyun Local Government Dr. Waheed Ibrahim, said that the massive project falls in line with the people-oriented goals and policies of the governor whose leadership he said has benefitted Ijagbo in many ways.

“Your presence here today is an affirmation and commitment to the development and welfare of the people at large,” he added.