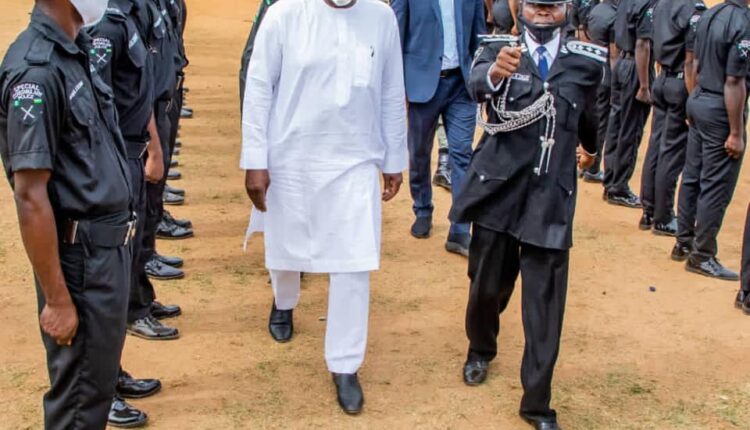 Kwara State Governor, AbdulRahman AbdulRazaq, has stated that more would be achieved in the area of security through active citizens’ engagement in intelligence gathering and unofficial community policing by being security conscious across their domain.

He added that through being active informants, the citizens would aid the activities of the police and other security agencies in winning the war against insecurity across the country.

AbdulRazaq said that despite the challenges, the country would certainly surmount the ‘difficult phase’ of security concerns it is going through at the moment, urging Nigerians to rally behind the President and the security agencies to combat the challenges.

“With your graduation today, you are fitting into the security architecture, linking the entire population with your communities, and remain the core professionals in the police force by ensuring that the right information or intelligence is passed through. Your presence will give confidence to the people in your communities and the state at large to make sure the environment is peaceful,” he said.

He added that the graduands would be deployed to their various local governments to strengthen intelligence gathering and security in the state.

“We must commend and continue to support the security agencies. Kwara is arguably the safest state in Nigeria today because of the work they are doing. We want to keep it that way. So, we must all support security agencies. We are passing through a difficult phase now but this will definitely come to pass,” he said at the ceremony.

“For us, security begins with all of us in our homes and in our workplaces. We must all report suspicious movements. We must make sure we give the right information to the security agencies so that it can be actionable. That is the only way they can totally secure our communities.”

Addressing the Special Constabulary Police Graduands, the Inspector General of Police, Alkali Baba, said that the trainees had been properly groomed in the basic knowledge of policing and respect for human rights of the citizens.

He singled out Kwara State Government for commendation for sponsoring the highest number of police constabularies for the initiative nationwide.

“We have 1,056 trainees who have successfully undergone police training in the prestigious training school located in Ilorin. I want to thank Governor AbdulRahman AbdulRazaq for his unending support to the Police and for making the training of first batch of special constabulary candidates in Kwara State a reality. I want to also appreciate community policing advisory committee for the wonderful jobs they have been performing in the state.”

Baba advised the new constabulary policemen to remain disciplined, obey lawful directives, respect and protect human rights of all Nigerians and be good ambassadors of the Nigeria police in their respective communities.