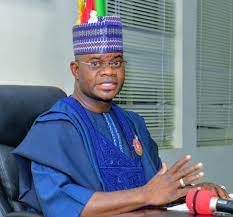 The Kogi State Government has urged the Nollywood creative industry to produce movies that would reshape public perception and promote peace oriented narratives in the country.

The government maintained that Nollywood as a creative industry was was strategic to the development of any nation especially with the contents they disseminate to the public.

While hosting the 13th edition of Best of Nollywood Awards (BON) in Lokoja, the Governor of Kogi State, Yahaya Bello stressed that Nollywood was needed now more than ever to assist the government in ensuring that the message of unity, love and peace was once again established to move the nation forward.

“The creative industry, especially Nollywood, is strategic in ensuring that the right information and perception is spread in the polity. As role models, your films and expression are vital to national peace and unity. We are at a time in our national history when all hands must be on deck. We must work together to ensure that all the negative elements, who want to divide us from remaining a united people, are put to shame,” he said.

In the same vein, the Chief Executive Officer/ Convener of BON Awards, Seun Oloketuyi, urged Bello to use the remaining years of his administration to open up the state to the world for more opportunities.

Also, Oloketuyi appealed to the governor to work with practitioners and the creative industry to ensure that the beautiful natural landscape in the state was exposed to the world through filmmakers.

“Today,  we celebrate inspite of all we are going through as COVID-19 has dealt a huge blow on the industry, but during this period the impact of the creative industry kept the nation sane as millions relied on our movies to keep their mental balance,” he said.

As learnt, the event was said to have been attended by top government functionaries, captains of industry and Nollywood stakeholders which include: Bello’s wife, Rashida Bello , the CEO of Confluence Rice, Seun Olonade as well as Nollywood actors such as Segun Arinze and Faithia Balogun.

Others were include: Biola Atanda popularly known as Madam Kofo, Deyemi Okanlawon, Kemi Afolabi, Yemi Blaq and Keppy Ekpeyong among others.

The BON Awards, is said to be an annual Pan-Nigerian travelling film industry initiative, which had in  the last 12 years moved to different states of the federation.