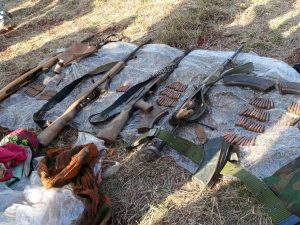 Following the Rejesha Amaniu Marsabit Operation at Marsabit county, at least  four guns and 138 rounds of ammunition have been recovered at an abandoned site by the Kenyan army at Manyatta Chorora village in Saku constituency, of the country.

The operation which began since 2nd of May this year, brings the recovery of the weapons to 140 firearms and over 1,000 bullets have been retrieved from wrong hands.

The operation was led by the operation commander in charge, Bernard Mbatha, who said that a suspect who had just been arrested led the security team to the site where the weapons were being hidden.

Speaking to the press, Mbatha said that the middle-aged suspect disclosed that he had dug a small trench and concealed the weapons underground.

The commander added that two AK 47 assault rifles and two carbines plus 138 rounds of ammunition were recovered, adding that other types of weaponry has also been recovered during the operation.

“The suspect helped us in unearthing the weapons, of which two AK 47 assault rifles and two carbines plus 138 rounds of ammunition were recovered. Other types of weaponry has also been recovered during the operation.”

The operation commander who was accompanied by the county police boss, Robinson Mboloi and the Marsabit Central DCC, David Saruni, noted that it was encouraging to the government that the operation was bearing fruit to discover large number of illegal firearms being recovered.

Earlier, the security personnel had earlier retrieved three rifles in Horoder and Bubisa areas with information from members of the public which helped to mop up illicit weapons in the hands of civilians.

Group urges FG to tackle electoral violence, others ahead 2023 elections