Youths march across Abuja, protest against killings, others… 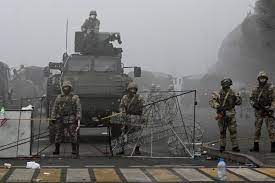 No fewer than 7,939 people have been detained by the Kazakhstan government throughout the country over violent protests as a result of an increase in fuel price.

The protest was said to have happened as a result of a hike in fuel price which had the people take to the streets to air their agitations over the government decisions and it it turned out more violent than expected.

The protest which had been ongoing for a while also attracted the assistance of the Russian government who had deployed paratroopers to the country to quell the violent protests.

As disclosed on Monday, by the country’s Interior Ministry, he stated that security forces have detained a total of 7,939 people over the unrest and protests in the country.

According to him, the protest is considered the worst they had ever experienced because of its deadlines, violence and how much lives that have been lost.

“It is the worst about of violence in the Central Asian nation’s post-Soviet history.” he said.

Also,  while speaking to newsmen, the country’s Secretary of State, Yerlan Karin, stated that he suspected a conspiracy which might have fueled the protest to the point which it turned out deadly and violent.

“I think there was some kind of a conspiracy involving domestic and certain foreign destructive forces,” he said.

Authorities have blamed the violence on “extremists” and “terrorists” some of whom they say were foreigners. Karim Masimov, former head of the National Security Committee, was detained on suspicion of treason last week, days after President Kassym-Jomart Tokayev dismissed him.

Tokayev has also sacked his cabinet, issued shoot-to-kill orders to end the unrest and declared a state of emergency in the oil-rich nation of 19 million. He also asked a Russian-led military bloc to send in troops, who the government says have been deployed to guard strategic objects.

Russian and state media reported 164 people were killed during the clashes, citing a government social media post. But health and police authorities did not confirm the figure and the social media post was then deleted.