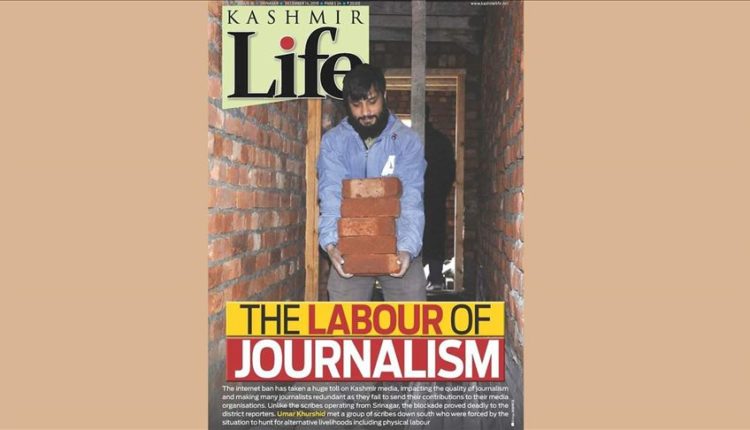 Restrictions on communication in India-administered Jammu and Kashmir has not only affected local media but is increasingly forcing many journalists to switch profession, in order to make a living.

Since August when India imposed a strict communication blackout in Jammu and Kashmir after stripping the region of its limited autonomous status under the Indian constitution, atleast five journalists have abandoned their profession to explore alternative means to earn livelihood in order to feed their families.

Indian authorities have justified the communications restrictions by saying separatists might use social media to trigger anti-government agitation. However, journalists in the region have been affected the most as almost local media stop publishing news due to internet cut.

Among the five journalist was Muneeb-ul-Islam, a young photojournalist of international fame, doing manual labor at a construction site.

Eldest among his five siblings, Muneeb, 29, heads the family since his father’s death in 2015.

“I am the eldest male member in my family. I had no other means to feed them since communication blockade has affected the media badly. I had to sustain myself and family,” Muneeb told the weekly at a construction site in South Kashmir city of Anantnag.

Over the past 100 days, he has worked on many construction sites to carry bricks, mortar and assist masons.

The story is same for 35-year-old photojournalist Mir Wasim as well. He represented one of leading daily newspaper, covering events in South Kashmir for over the past six years. He is now selling disposable items at a shop, owned by his uncle.

“People have no idea, how badly the lack of internet and mobile phones have affected us. Many of my friends have not earned a penny since August,” said Wasim.

Since people know his background, they instead of purchasing items, come to his shop to enquire about latest political situation.

“I tell them, I am no more in touch with media, I am just a helper in the shop now. Nothing more than that,” said Wasim.

Bashir Ahmed, 40, another journalist, has bought a printing machine to earn a living.

He was working for a Delhi-based Urdu language daily newspaper for the past one decade. “I was the one responsible for overall coverage. But since I am unable to send stories. I am no more their employee,” he added.

Rehmani Sameer, 32, a photojournalist of repute, is seen selling medicine at his brother’s shop.

Naveed, another young reporter, who was working with leading English dailies published from Srinagar, is a trainee at a local chemist shop.

“After my organization stopped paying me, I said goodbye to journalism for some time. I had no other option,” he said.

“I thought it will help me to at least handle my own expenses,” he told the weekly.

The restrictions have affected all walks of life in the region. But media, which thrives on communication has been affected the most, said Kunal Majumdar, India head of the New York-based Committee to Protect Journalists.