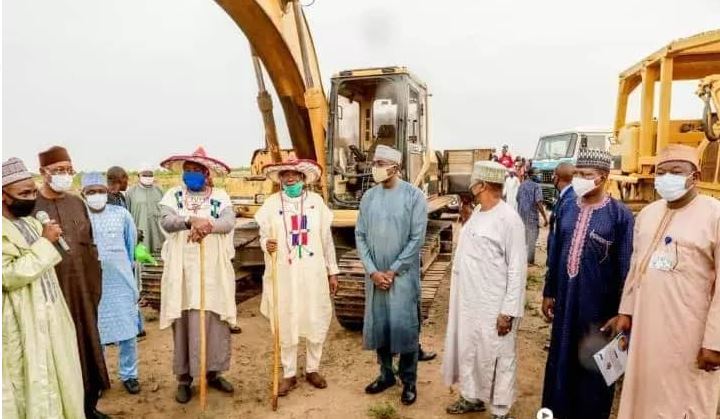 The Kano State Governor, Abdullahi Ganduje, has commenced construction of ‘RUGA’ fort for herdsmen settlement, a development that is expected to put stop to communities and headsmen crisis which often leads to loss of lives and property.

Ganduje assured that the RUGA fort if completed would help curb rate of crime attached to the Fulani-herders across the country just as he urged Federal Government to assist in putting place law such that would restrict the movement of herdsmen from other African countries into Nigeria.

The Ruga project built in Yansoshi Forest in Kiru Local Government area will consist of 200 houses, schools, a hospital, a police station, a large dam for raising livestock, and more.

Speaking during the commissioning of 25 housing units of RUGA settlement project at Dansoshiya forest, in Kiru local government of the state, the governor stated that the completed 25 housing units was the first batch of planned 200 housing scheme set for construction in the state.

He noted that the call was necessary in order to successfully and effectively prevent coming of herdsmen from other African countries while he alleged that nomads come into Nigeria with guns and other weapons and that government at the federal level must arrest the situation.

Explaining importance of Dansoshiya RUGA, it indicated that the fort would serve as a nucleus of RUGA settlement project in Kano and that the state was ready to continue putting in best to ensure herdsmen crisis were settled.

“We engaged in this project for three fundamental reasons, first and foremost is to avoid clashes between farmers and herders, secondly to avoid movement of herders which is the source of conflict and to avoid cattle rustling.

“It is absolutely necessary to improve and modernize the breeding system for Fulani cattle. As it is clear that a gallon of milk is more expensive than one gallon of petrol, it is, therefore, necessary for us to utilize this great opportunity,” he added.

He also promised to construct a school and hospital in the settlement, so that the people settling there could get access to good health care.