Kano: Ganduje and Naval new base 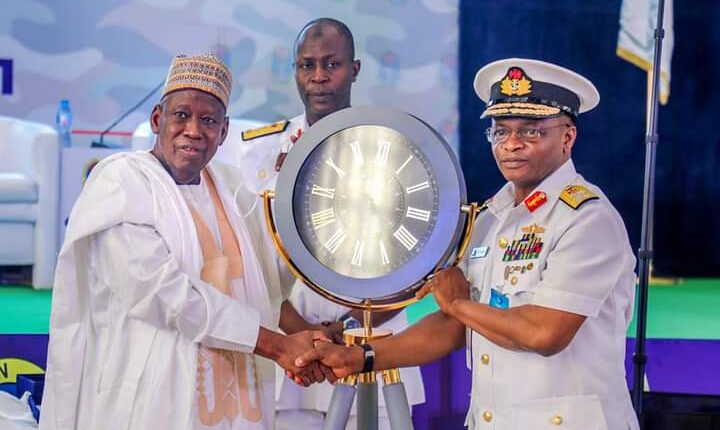 Notwithstanding the hate elicited debates and criticisms that followed the approval of establishing a naval base in Kano State, Governor Abdullahi Umar Ganduje is consolidating on his community policing gains.

The community policing project was first launched in Karaye Local Government Area in 2019 as part of the Ganduje administration’s effort to engage traditional rulers and incorporate them into the state’s security committee.

The choice of Karaye as the starting point was strategic being it close to Katsina State, which is one of the northwest states ravaged by devilish bandits who have continued to terrorize the residents.

Security of lives and property is the primary responsibility of every government. And Governor Ganduje is walking the talk.

Being an experienced administrator, Governor Abdullahi Umar Ganduje knows that no development will be achieved on a shaky foundation of insecurity.

Everyone may wish to be a leader, but not everyone is blessed with the intellect to correctly do the summation of leadership.

Governor Ganduje has done his homework well and Kano State is enjoying the fruit of this hard labour. Isn’t Kano one of the most peaceful states in the country?

The governor first requested for the establishment of a naval base in the state when he visited the Chief of Naval Staff (CNS) Vice Admiral Awwal Gambo, a son of the soil, at the Naval Headquarters in Abuja in June this year.

He then pledged to provide befitting infrastructure facilities in the state for the good working environment for naval personnel. 100 hectares of land was allocated for the project.

What Governor Ganduje is saying here indirectly, in his usual style of speak little but act more, is that leaders should learn to practicalized ideas; this is where Governor Abdullahi Umar Ganduje stands out.

As a follow-up, Vice Admiral Awwal Gambo was in Kano for a three-day visit – first at Bayero University, where he delivered a lecture; then to a courtesy visit to the governor; and on a sightseeing tour around the state.

You cannot invest so hugely in infrastructural development as the Ganduje administration has done and sleep with your two eyes closed; the issue of security arises.

Apart from the gigantic flyovers that crisscross the commercial centre, making it a reference point in infrastructural development, other huge investments have been put in place to cater for the need of Kano teeming youth. The multi-billion skills acquisition centre is one such investment.

The Nigerian Navy was taking a strategic decision to decongest its presence in the Lagos area by expanding to locations other than Lagos, Calabar, Warri and Port Harcourt.

It has established the Nigerian Navy Finance and Logistics College in Owerrinta, Abia State, Nigerian Navy School of Armament Technology in Kachia, Kaduna as well as the School of Health Sciences in Offa, Kwara state.

Governor Abdullahi Umar Ganduje took advantage of this moved and he hit the iron, as they say when it was hot and red.

Kano’s multi-billion cancer centre is at a finishing state. What remains now are the finishing touches. But how many us know about the genesis of this huge investment in the health sector?

Governor Abdullahi Umar Ganduje borrowed the idea of establishing a state-of-the-art cancer centre in Kano when he visited Melborn, Australia some years back. Upon his return to Kano, the governor requested from then contractors nothing less than what he saw there. ‘Let replicate what I saw in Melborn here in kano,’ he told them and so it is being done.

This idea of sitting a naval base in Kano, which is a coastal area must have been informed by what is obtainable in Portsmouth, Clyde and Davenport in the UK and Maryland, Connecticut in the United States.

In an advanced country in the world navy operate everywhere as long as there are facilities to aid their operations. And Governor Ganduje has vowed to match words with action. So he is doing.

Do you know the blueprint? During his acceptance speech, days after he was declared the winner of the 2019 gubernatorial election in the state, Governor Abdullahi Umar Ganduje promised to run an inclusive government.

What this means is this: ‘let every son of the soil, regardless of his or her political party affiliation, come forward and contribute his quota to the grand design of making Kano State work again’.

This is an ideal Uban Abba cherishes and pledged to implement. Part of the pledges was the security of life and property. Alhamdulillah Kano is one of the most peaceful states in Nigeria today.

Now Kano is becoming a tourists’ attraction. Do your business, market your product, live here if you want or leave in peace, Governor Ganduje is making Kano proud.

Then came ‘The Most Security Compliant Governor Award’

It was at The Nigerian Defence College Hall, Kaduna when the Nigerian who-is-who gathered to celebrate the people’s governor being honoured with ‘The Most Security Compliant Governor Award’.

One of the reasons given by the organizers, My project Institute of Security and Strategic Studies, for conferring the award on the governor was that “The internal security setting in Kano has attained greater height sequel the proactive response of the governor Abdullahi Umar Ganduje and his team of security advisors.”

The secret is that be a servant first, then a leader.