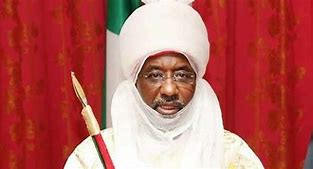 The Kano State House of Assembly has formed and commissioned a commitee charged with investigating the Emir of Kano, Muhammadu Sanusi II, over allegations of breach of laws, which was said to have been laid against him by concerned citizens of the state.

The House disclosed that it had received petitions against the Emir which raised issues of flagrant disregard for and violation of state laws which were alleged to have been committed by the traditional ruler and stated that it was ready to investigate in accordance with powers held by the house.

House member representing Sumaila constituency, Zubairu Hamza, raised the issue on house floor and urged his colleagues to do due dilligence during course of the investigation, stating that such was duty expected of them by citizens who they represented in the house.

Speaking during plenary on Wednesday, in the state, Hamza, who also doubles as Local Government and Chieftaincy Affairs Committee Chairman, read the petition which was written and submitted to the house by Kano Society for the Promotion Education and Culture and one Muhammad Muktar Ja’en, alleging that the Emir had violated several cultural rules, traditional norms and values as well as Islamic religious tenets.

The chairman noted that the petitioners raised concerns on the Emir’s conduct, which they alleged was not in accordance with his position as a custodian of traditional and religious values in the state, adding that such issue fell under purvew of cases which the committee was expected to investigate and address thoroughly.

He urged the committee members to discharge their duties without fear or favour, and to do so with speed and accuracy, saying that the sensitivity of the case was such that should not be delayed.

Hamza revealed that the petitioners had pledged to make several evidences of the alleged violations available to the house, adding that the submitted evidence would also be thoroughly investigated to determine accuracy and authenticity of the submissions.

In his response, the  House of Assembly Speaker, Abdulaziz Gafasa, charged the committee to probe, investigate and document all findings in connection with the allegation petition, adding that a comprehensive report was expected on the house floor within seven days.

Gafasa, who assured members of public of the house’s commitment to ensuring that citizens opinions were adequately represented on the House of Assembly floors, however reiterated that the house would not tolerate waste of its time on false allegations or petitions fueled by personal vendetta.

“We will do our very best to represent our constituents adequately on the floor of this house, however, we will not take kindly to false allegatons or malicious petitions,”

“I hereby charge the committee members to do due diligence, no man is above the law and so we must uphold the rights and laws of our State, irrespective of whoever is involved”.