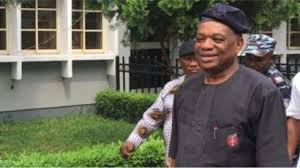 The Former Governor of Abia State and All Progressives Party member, Orji Kalu, has disclosed that he is set to dedicate himself to peaceful existence and the provision of timely justice to all Nigerians across the nation.

He said that his recent ordeal in incarceration and subsequent release had impressed upon him the need to ensure that justice was served to all Nigerians irrespective of status or location.

The announcement came few hours after the serving Senator was released from prison following the voiding of his December 2, 2019, conviction on charges of fraud, embezzlement, and mismanagement of public funds.

Kalu, through a statement released on Friday, said that his time in prison had revealed the high number of inmates who were incarcerated while awaiting trials as well as prisoners who claimed that their convictions had been based on trumped-up charges.

He said that it was unacceptable for justice to be upheld only in matters concerning a fraction of the nation’s residents and pledged to increase the drive for prompt adjudication of cases in the Nigerian legal system.

“I would like to let it be known that the events of the past five months gave me an added perspective on matters of justice and injustice in Nigeria. I have come to know that the course of justice will not be complete if it stopped in my case. It must continue until it touches the lives of millions of Nigerians who face injustice anywhere in this world,”

“I shall be dedicating my time henceforth to ensuring there will be justice for all Nigerians whether they are in Sokoto or Akwa Ibom or in Lagos or Maiduguri or in Jos or Enugu, or wherever they may be. Justice for one man or for a few people will no longer be enough in this country. A system whereby over 70% of all prison inmates population is made up of people awaiting trial cannot be allowed to continue. Situations, where innocent people are falsely charged with murder just to get them out of the way, do not dignify our country and cannot continue,”

“Justice must now mean justice for all. That is my pledge to Nigerians”, he said.

The Senator, who expressed elation at his courtroom victory and subsequent release from prison, stated that the period, though challenging, had taught him invaluable lessons about the county, its people, and the judicial system.

He thanked family, friends, and well-wishers for their prayers while incarcerated and lauded the Supreme Court Justices for their dedication to the rule of law.

“I want to use this moment to thank my family, my colleagues, my friends, my supporters, the people of Abia State, and all Nigerians for their unflinching and unwavering confidence and trust in me through the very testing period. We all know today that their prayers have not been in vain. I also use this opportunity to express my gratitude to the Nigerian Correctional Service for the unalloyed professionalism and sincere humanity extended to me by its staff while I was in their custody,”

“I must accord a special mention to the Justices of our Supreme Court for their unwavering commitment to the rule of law. We all stand reminded of the consistent and strategic relevance of the Nigerian Supreme Court in holding this country together, even in moments of great peril. As far back as in the 1971 case of LAKANMI V. ATTORNEY GENERAL OF THE FEDERATION, (the Ademola Adetokunbo-led Court) the Nigerian Supreme Court has severally rescued this country from the precipice… This long tradition of the court was exemplified in today’s judgment. I was humbled by the court’s boldness and sense of justice as shown in my case”.

He revealed enthusiasm to return to the house and resume legislative duties and said that he looked forward to rejoining colleagues as soon as possible.